ON-LINE MAPPING OF RIGHTS OF WAY

Some local authority websites now include facilities to display on-line maps including rights of way. These include:

http://www.cheshire.gov.uk/countryside/Prow/ProwAdditionalDetails/definitive_map.htm (then click on 'Online Mapping' link in the second paragraph)

http://www.derbyshire.gov.uk/leisure/countryside/Access_recreation/rights_of_way/  (then scroll down to the 'Derbyshire Maps' link)

http://roam.rotherham.gov.uk/planaccess2/planaccess.asp (then select Public Footpaths, Bridleways & Byways from the list of Themes)

Following on from the New Ways of Working Conference held in 2006, four Area Officers (left to right Harry Scott, John Harker, David O'Leary, Chris Davison) have been appointed. The areas that these officers cover are shown in the table below. 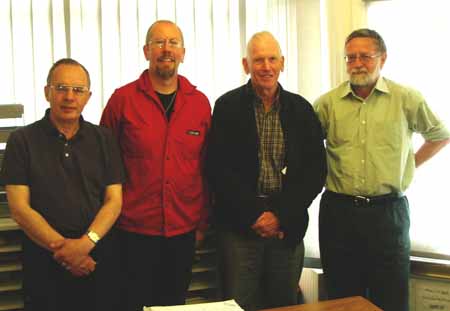 Review meetings have been held with the AO's and Assessors on the New Ways of Working Pilot scheme, and various changes / improvements have been initiated. There will be a follow-up meeting with the Chairman / Vice-Chairman in early October unless any matter requiring a policy decision emerges in the meantime.

The role formerly undertaken by Roy Spoors has been split three ways to Harry Scott, John Harker and Terry Norris. The areas covered by these three individuals are as follows:

To ensure that there is no misunderstanding on taking action under section 63 or section 56, please note that these must not be done in the Society's name directly by inspectors, but via the appropriate Courts & Inquiries Officer.