A day on the Isle of Skye

People often say 'lucky you' when I tell them I am heading to the Isle of Skye. I suspect they imagine that I am off on a Society funded jaunt to the West Coast of Scotland rather than to Hunshelf near Barnsley. They are right about 'lucky me' though, it being a great pleasure and privilege to represent the Society when duty calls.

Sunday 17th June was one of those special days as I travelled up to Barnsley to take part in the celebration of many years of hard work for the people of Hunshelf.  I can only summarise their remarkable efforts and the details of two intertwined stories in the space available. Story one starts with G H B Ward, who played a major part in the Society's history, and money bequeathed on his death in 1957.  It was a complex bequest and the Society only received the money in 2007, at that time I was Vice Chair.

Story two starts in 2006 when nine remarkable  'Friends of the Isle of Skye' purchased the land, using personal savings, to ensure it remained a wild and tranquil place. The selfless act by the 'nine' provided the breathing space for the Parish Council to raise the £33,000 necessary to purchase the land for the local community and all walkers who wish to tread this lovely spot.

In 2008 I received a letter from David Horsfall, Clerk to the Parish Council, requesting a meeting with the Society. This was my first year as Chairman and it was clear that this was no ordinary request. David Horsfall and his wife Willan made an impressive presentation to the gathering of Trustees and Officers, aimed at seeking funding to assist with the purchase of the land by the Parish Council.  They had spent three years fund raising and were £6000 short of the required sum. More meetings, phone calls and hard work, mainly on the part of Adrian Littleton, led to the grant of £6000 by the Society from the Ward legacy, and in 2009 I travelled with Adrian to handover the cheque to David and Willan. Much has happened since 2009, lottery funding of £50,000 has rebuilt dry stone walls and made other improvements to this wonderful open space. 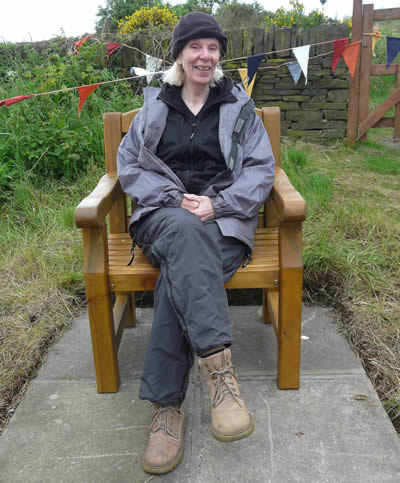 Which brings me back to 17th June 2012, when I met Gillian Davies (see photo above), daughter of Ted and Nellie Spencer, Ted was an executor to the Ward Estate. David Wandsworth and Peter Kidd who built the dry stone walls were there. Proceeding were led by Kathryn Austin, Chairman of Hunshelf Parish Council and the tape was cut by Councillor Dorothy Higginbottom, Mayor of Barnsley (see photo below). David and Willan, are by now old friends,  they never miss an opportunity to promote the Society. A recent article, in the Barnsley Chronicle, carried a picture of David standing next to SP425 following praise from David Cameron for the efforts of the Parish Council. 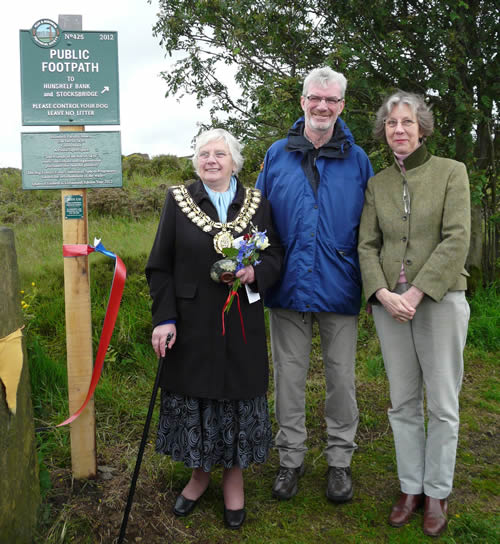