Kay Douglas ,Secretary of Eccles Rambling and Social Club, long time and much valued Affiliates of our Society invited me to attend and say a few words at their meet-up north west of Dunsop Bridge on June 23rd. It was a most special occasion as there was to be the dedication of 2 signs each having been generously donated by twin sisters Brenda and Margaret Carr to celebrate their 70th birthdays. Both decided they wished to mark the occasion by, as they put it, giving something back to walking  which through life had given and continued to give them so much pleasure. 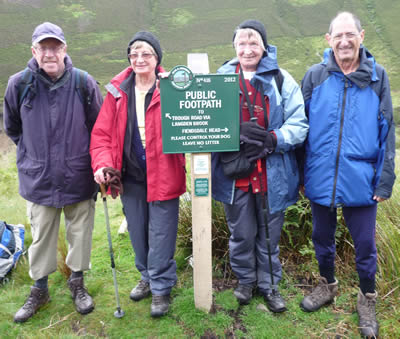 So some 30 of us set off along the Langden Brook whose tame name belied the reality that it was a river in spate after some awful weather over the preceding days. The signs are both in imposing settings affording great views of the Langden valley one located a quarter of a mile before Langden Castle and the other a short distance beyond, when approached from the east. The locations were selected by our David Morton who duly obtained the necessary consents.

There was the not unexpected debate about the origin of the Castle now functioning as a sheep/cattle shelter - as maybe has always been the case. Some locals however suggest it was built as a stopover for guards and prisoners on the way to Lancaster assizes.

After an introduction from Frank Pollitt, Chairman, and a few words from myself and responses from Brenda and Margaret we all partook of fizzy and cake with smiles all round. Nice one twins!!