This article is from Signpost, Summer 2013

April 27th 2013 was quite a day for PNFS. The EGM voted unanimously for the new Constitution thereby giving Trustees the authority as well as the responsibility for effectively managing the Society. In addition the Constitution is now based on the Charity Commission model which meets Charity Commision requirements much more closely than did the previous constitution.

The EGM was then followed by the AGM which again voted unanimously for your new Chairman, yours truly, and for the election of four additional Trustees. The complete Trustees Team is now in addition to myself: Rhoda Barnett, Bill Buckley, Paul Easthope, John Harker, David Morton, Terry Norris and Alistair Taylor.

Clarke Rogerson stood down as Chairman and was duly elected as President. Under the new Constitution the President is not a Trustee but is able to “stand aside” from the daily management of the Society, in a position to provide advice and guidance to the Trustees as needed. I have assured Clarke that I will need all the advice and guidance I can get !

At this point I would like to say a big thank you to Clarke for the enormous contribution he has made to PNFS as Chairman over the past five years. He has ensured that we are now on a much sounder financial footing than when he took over and as a consequence will be able to consider investment in additional resources to enable us to achieve greater growth and become more efficient.

Looking to the future, I firmly believe we need to increase our membership numbers steadily over the next few years, if we are to continue to be in a position to fulfil our role of protecting footpaths throughout our area. To this end, we are “recruiting” a Membership Development officer to take on this responsibility.

Good news has been plentiful over the past few weeks. April 26th the day before the AGM, a walk to celebrate the Society's major contribution to the opening of Congleton 82, the footpath over ‘The Cloud’ near Congleton, took place. Sixty people joined the walk including the Mayor of Congleton who gamely completed the walk including climbing over the new ladder stile in her extremely smart trouser suit, see contents page photo.

More good news from a lady in Derbyshire who is not (yet) a member of Peak and Northern but who has already raised in excess of £1200 for the Society. Fiona Corden ran the London Marathon in memory of her late father who was a very keen hill walker and who loved footpaths. Fiona wanted to donate her sponsorship monies to an organisation that had practical impact on the preservation of footpaths, and chose us. She believes that her father would be delighted at her choice. If you would like to make a donation to Fiona and her good cause, you can do so either direct to Taylor House or via the ‘Just Giving’ web site.

The official opening of the new bridge near the Jumbles Reservoir took place May 7th. This bridge has been financed by P&N and has enabled Bolton MBC to open up the footpath to the West Pennine Moors. Full details can be found in our news pages. 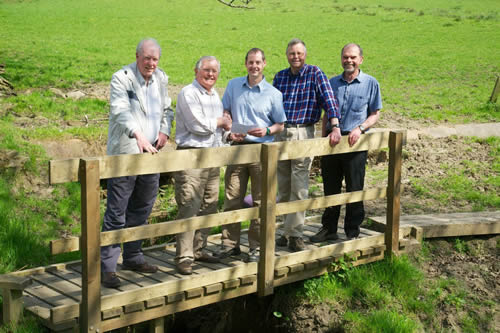 Finally, in our constant quest for new members we will be present with our “Marquee Stand” at the following events this year:-

I firmly believe we need to increase our membership numbers.

Come and visit us, bring a friend, they are bound to join when they see what a good job we do!!

In addition we still need some volunteers to help man the stalls and recruit new members, so if you would like to help, please contact me. All in all, exciting times and I am certain many more to come.