This article is from Signpost, Autumn 2013

Have you enjoyed the summer and your strawberries and cream? But do you know where your strawberries come from and how they are produced? No doubt you have this vision of an open field with the sun shining down as workers pick the strawberries, or of granddad on his allotment. How wrong you are. When you pick up that plastic box in the supermarket you have no idea of how the strawberries are produced. The reality is that strawberries are now grown on an industrial scale, and I mean industrial, acres of land taken over and heavy machines used in the process. In mid Staffordshire there are several sites given over to soft fruit production, most of which is strawberries, grown in large metal poly tunnels frames over several acres. Employing over 300 people during the summer putting two million pound into the local economy.

You may well ask what this has got to do with footpaths, well footpaths are blocked by the poly tunnels, rainwater runoff floods footpaths, and heavy machinery used destroys the surface of footpaths. The poly tunnels are an eyesore on the landscape and areas covered by the tunnels are littered by polythene and cartons of every shape and size. When the land is exhausted the tunnels move on but the devastation remains.

So next time you pick up the little plastic box filled with tempting strawberries in the supermarket ask yourselves is it worth the loss of the landscape and our footpaths, because they do come at a heavy cost to us all. 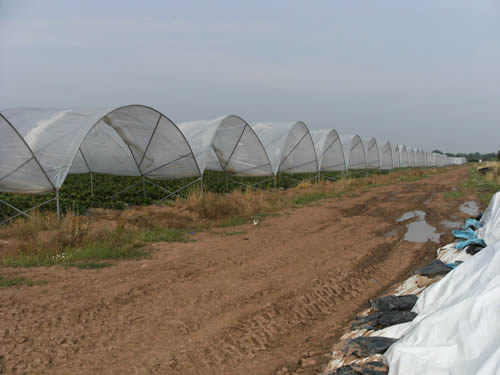 Polytunnels on Penkridge FP 41, part of the Staffordshire Way