This article is from Signpost, Autumn 2013

“December 11th saw a decision by Lancashire County Council remarkable for its disregard of the law and evidence.” So began our article under this title in the last Annual Report.

We are delighted to report that the Secretary of State’s Inspector agrees. In his decision letter he says, “…it does not appear to me that any of the Members who spoke against the application gave any consideration to the statutory tests that must be applied under schedule 14 of the 1981 Act. Two Members stated that adding the appeal path through the curtilage of Brown’s Houses to the map and statement did not make ‘common sense’ when there appeared to be a path along the foreshore in very close proximity.” In allowing our appeal, he encourages the concurrent promotion of “our” Order with the other, factually related, Orders which the Council decided to make.

By way of reminder, the Society’s application for a Definitive Map Modification Order to correct a drafting mistake (made when the Definitive Map was originally published) had been rejected by the Council. It decided to make Orders establishing a new footpath on the foreshore in front of Brown’s Houses and also to extinguish FP 14, so far as it lies behind the sea wall which you can see on the photograph. We want to link Lindreth Road (which ends in the trees to the left of Brown’s Houses on the photograph) with FP 14 by means of 30 metres of path running behind the sea wall. The evidence is to the effect that use of that route stretches back at least into the early nineteenth century. 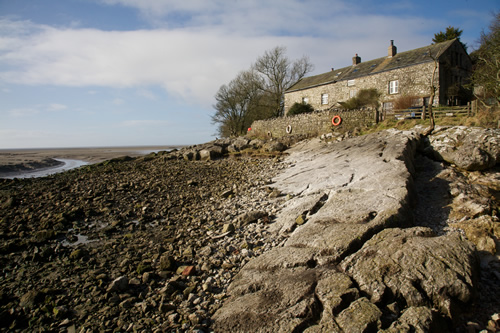 Since the path was blocked in 1994, walkers have not been able to get from one side of Brown’s Houses to the other at high water and at other times have had to pick their way with care across the rocky foreshore plainly visible in the photograph (above). That is difficult enough for the young and agile, risky for those of advancing years and impossible for the elderly or infirm. Despite a thorough enquiry in the 1990's supported by very good user evidence and resulting in a resolution by its Highways Committee that a public right of way on foot existed along the route behind the sea wall (as currently claimed by the Society), Lancashire County Council did nothing to assert and protect the rights of the public until prodded into action by the Society in 2009. But for the contention in the 1990’s over the Committee’s finding, it is almost certain that today’s users of the Lancashire Coastal Way would enjoy the magnificent views from the vicinity of Brown’s Houses instead of having to divert inland to pass behind Brown’s Houses some distance to the north with the shoreline and the view from it out of their sight.

Following the Society’s 2009 application, it took until December last year for a very thorough report by the officers to be brought to the Committee. The unequivocal officer’s recommendation that the existence of the claimed right of way behind the sea wall had been established on the balance of probabilities was completely rejected by the Committee which decided that the evidence for a route across the foreshore, which the officers regarded as weaker was, in their opinion, stronger.

Our appeal against the Committee’s rejection of our application was decided remarkably quickly for this kind of case. Lancashire formally notified us of its decision in February and the Inspector’s decision is dated 9 July. Pleasing though it is, that decision just heralds a fight to come. Lancashire must first make the Modification Order which we expect to be very strongly opposed by the owners of Brown’s Houses, among others. All our efforts will now be focused on ensuring that “our” Order proceeds in parallel with the other Orders the Council decided to make. That gives us the best chance of having one tough and undoubtedly expensive fight at an inquiry, rather than suffering the additional costs of two or more successive inquiries. If Lancashire agrees that one inquiry into all orders is sensible, we then need to be sure Lancashire will promote all the orders through the inquiry. It has no obligation to do so and it is not uncommon for Councils directed to make orders by the Secretary of State to refuse to promote them. If that happens, we shall have to take on the promoter’s job. But, in view of the Inspector’s remark, we hope Lancashire will promote all the Orders together. That will put us in a supporting role as regards “our” Order but also make us an opponent, especially in relation to the Order to extinguish FP14 behind the sea wall.

It is likely to be several years before we have a final result: years during which our file will always be live with periods when bills of significant size will come rolling in. But we relish the prospect of the fight to come. After all, it is an excellent cause in the best interests of walkers and with good evidence. And it helps more than a little that it is a beautiful spot to visit. You really should try it one day.

We will keep you posted.

Next: Opposing diversions of old routes to historic buildings.