Inspector and dog get wet feet - all part of the job

Councils in our area are legally obliged to consult the Society when they make diversion orders; most are sufficiently sensible to consult us before they make orders, so that they have a chance to change the proposals if we respond that we will object to an order if it is made.

In August this year the Society was consulted by Derbyshire County Council about a proposed diversion of two paths which are close together in Gridleford and Froggatt parishes. The diversion order would be made under the provisions of section 119 Highways Act 1980. The diversions were considered by the council to be in the interests of the landowner, one of the requirements of the legislation, since they would "take the paths from the immediate vicinity of the house".

We are fortunate to have Inspectors for both parishes, and both were able to look at the proposals on site. The verdict was unanimous. The diversions would indeed be in the interests of the landowner. 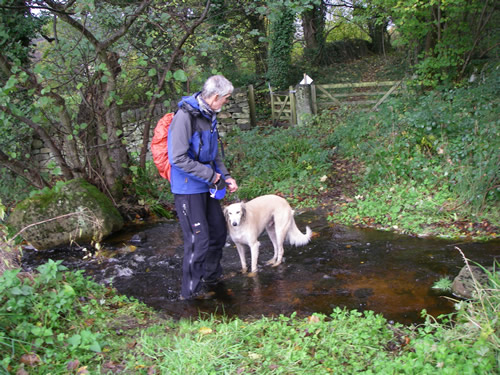 However, other legal requirements are that the new routes must not be substantially less convenient for the public, and regard must be had to the effect on public enjoyment. In this case, one of the paths would be diverted through a stream, which the council said would be crossed on existing stepping stones. This crossing is shown in the photograph above - no apparent stepping stones, slippery stream bottom and wet feet, hardly convenient or enjoyable.

We therefore objected to the proposals. Fortunately the council has listened, and the landowner is now to be asked to provide a footbridge across the stream. But why consult on such a sub-standard scheme in the first place?

The council has a legal duty to protect the rights of the public using highways, which include public footpaths, and should not rely on volunteer groups such as our Society to safeguard the public interest.