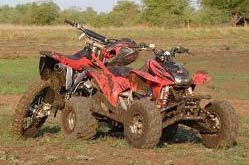 Sue and Chris Woods (Peak District Green Lane Alliance), guest speakers at the AGM in April, have this to say about what you should do if you see illegal use of a route or moorlands by recreational motor vehicle users

It is illegal for recreational motor vehicles to use a footpath, bridleway or restricted byway and to drive on open moorland or on fields without the owner’s permission.

It is legal (unless there is a TRO in place) for recreational motor vehicles to drive on a Byway Open to All Traffic (BOAT).

It will be uncertain whether it is legal or not for recreational motor vehicles to drive on a route shown as an Other Route with Public Access (ORPA). However, the Police will take no action unless dangerous driving or driving without number plates is involved.

It is always legal for landowners, farmers and emergency services to drive on any route.

It is also illegal to drive on a route where there is a Traffic Regulation Order (TRO) forbidding recreational motor vehicle use. We are aware of some known permanent TRO’s in the Peak District National Park (unfortunately there is no central list of these).

Temporary TROs come and go for repairs to routes. Some of these will prevent certain classes of users from using the route. These are often flouted and are not always signed well or publicised.

If you see illegal off-roading in progress, please report it to the Police as soon as possible using the non-emergency 101 number.

Insist that the Police give you an incident number so that it gets recorded on their system. If you can safely get photographs, please do so but take care as there have been cases of people having memory cards removed from phones by recreational motor vehicle users. Do inform the Rights of Way Officers of the relevant local authority and PDNPA by email (Mike.Rhodes@peakdistrict.gov.uk) so that they are aware of the problem.

If the incident involves a footpath, bridleway or restricted byway, if you have the time, check to see whether signs forbidding recreational motor vehicle use are in place (they are often removed in some areas). If signs are missing or appear never to have been present, let the Rights of Way Officers know. Good signage could help to reduce the problem.

Also report any instances of dangerous driving or driving without number plates whatever the status of the route.

Do not expect any immediate response from the Police. Hopefully, they should give you some feedback but that is not always forthcoming.