This article is from Signpost 48, February 2015 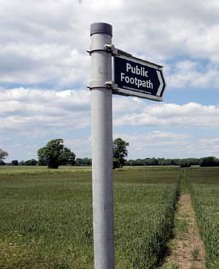 Footpath Sandbach 29 is a short link between a housing estate and the junction of Sandy Lane and Moston Road, on the outskirts of Sandbach. It passes between several houses on the estate and then over industrial land used for the storage of vehicles. The path is currently obstructed by fences. Sandbach Ramblers served a notice on Cheshire East Council seeking to have the obstructions removed. In response the Council proposed to divert the route of the path. This proposal was abandoned following objections by landowners and from the Ramblers, who considered the diverted path’s width of 1 metre to be too narrow. The owners of the industrial estate then applied to the Council for an order to extinguish the path. The Council supported this order.

The Society then joined with Sandbach Ramblers, a group affiliated to the Society, in opposing the order for extinguishment. We considered that the path could provide a convenient route to the local shop and other locations. We did not accept the Council’s contention that using estate roads was a satisfactory alternative. Path 29 potentially provided a shorter, traffic-free route, which also linked with other paths providing access to the wider countryside.

The matter was determined at a hearing held before an independent Planning Inspector. The legal criterion under section 118 of the Highways Act 1980 is whether it is expedient that the path be stopped up, having regard to the extent to which it appears that the path would, apart from the order, be likely to be used by the public. For the above purposes any temporary circumstances preventing the use of a path, e.g. fences across the path, shall be disregarded.

The Inspector found in favour of the objectors on the basis that the footpath was likely to be well used in the future if the obstructions were removed. The industrial site crossed by the path has been sold and the Council are in negotiation with the new owners to try and find a satisfactory route for a diversion of the path. The Council’s statement of case made at the hearing stated that ‘the only use of the path is at a very local level to get from the estate to Moston Road’. That is just why the Society objected to its extinguishment. Traffic-free pedestrian routes matter to local people.