Fighting to keep our footpaths open

In the Sheffield Telegraph’s issue of 3rd December 2015, it mentioned PNFS in an article entitled ‘Rangers brave the Peak District elements for a slab of the action’. The article described slabbing work performed on a Blacka Moor footpath for Sheffield Wildlife Trust, in a notoriously wet area. It continued: ‘The path work was largely funded by the Peak and Northern Footpaths Society through a bequest from the great local ramblers’ champion GHB Ward, and should be completed this week’ (Sheffield Telegraph, 2015). 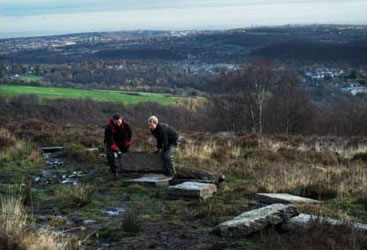 The photo shows Steven Hodson (left) and Adam Kirkland, Peak District National Trust Rangers, who were contractors for the work, moving flags ready for one of the new paths.

I have visited the site to take some photos, two of which are reproduced above. You can see how boggy the ground is and there has been lots of positive feedback from local walkers, including one I met while I was taking the photos. Natural England, with ultimate responsibility for the site (part of a SSSI & Special Area of Conservation) is delighted with the work done, which will protect an ecologically sensitive site from erosion & further damage. I also responded to the article in the paper with a letter, since published, promoting and publicising the work of PNFS.

My letter is summarised below:

Your article on the stone slabbing of a footpath on Blacka Moor (December 3rd) mentioned the £10,000 funding provided by the Peak & Northern Footpaths Society.

The Society is also funding improved signage on Blacka to the tune of £1,700 next year.

Our latest two ‘battles’ are to save public footpaths: leading from Bradway to Dore & Totley railway station which Network Rail wants to close while redeveloping the station and; across the railway line used by walkers for decades in Wharncliffe Woods near Deepcar, which has been blocked off by Network Rail with no notice (local MP Angela Smith is assisting us in our efforts to get it reopened).

Walkers must be ever vigilant in fighting to keep paths walkable, as resources for highway authorities are reduced year on year. The importance of societies like ours will only increase in years to come.