By the time you read this, PNFS will have passed a small milestone. We installed our first cast metal (iron) signpost, or “direction post” or “notice” as they were called then, in 1905. On 8th October we erected our 500th (not counting finger posts).

On 17th October, representatives from Edale Parish Council, The Ramblers, Peak District National Park, Friends of the Peak District and PNFS attended the unveiling. It overlooks the route followed by Bert Ward and his group, who in 1900 walked 20 miles around Kinder using the William Clough path (reopened in 1897, mainly due to PNFS pressure on the landowners).

Since June we have installed 14 signposts:

These three, on or near the Ecclesbourne Way at Wirksworth, are in memory of our deceased friend and benefactor, Geoff Errington of Belper, one of our Monday Volunteers at Taylor House.

The other signposts installed are:

*S502, S503, S199 all commemorate 45 years of the Cown Edge Way, opened in 1970 **These four signposts were installed by Peak District National Park (PDNP) Volunteers, supervised by Rangers Paul Wetton and Helen Parry. Many thanks to all of them. 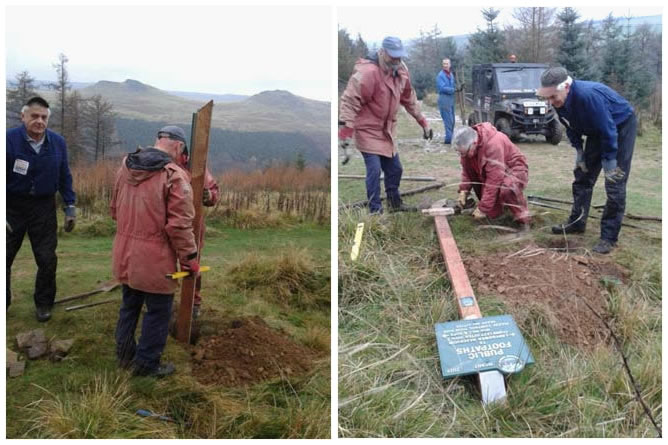 S504 is with Paul Wetton, Head Ranger at Fairholmes. It has a cross plate partly funded by Moscar Estate. Once Paul, Helen and the Peak Park volunteers have hauled it up the hill from Ashopton, it will stand just south of Whinstone Lee Tor at the south end of Derwent Edge. It will commemorate “Beverley Bob” (Robert Dobbs), late of Sheffield.

Three more signposts (S508, S509, S510) are due to appear in the woodlands between Win Hill and the western arm of Ladybower Reservoir, thanks to the Peak Park Rangers and Volunteers. They too will be available for dedication/commemoration.

S516 is ordered for Birchin Hat, Alport Castles, in the New Year. The Peak District N.T. Centre has financed it. The N.T. will help to transport it from Westend Clough before the falcons return.

Ted and John have helped me to repost S221 and S249 East of Higher Poynton Marina using concrete stumps, which will save money and outlast all of us.

Many thanks to Mike, Pete, John and Ted and those who have either made suggestions for new locations or notified me of the condition of our signposts.

Phone me evenings on 0161 283 7824 if you have any questions concerning a commemorative plaque or a new signpost. The cost is still £300, which includes maintenance.