The View from the Chair 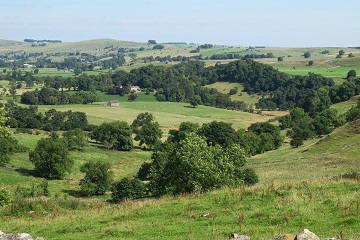 Thoughts of the past summer, with its variable weather conditions, will soon be a distant memory. We have had pleasant days for walking, but equally some rather poor, unseasonal ones. The best day for me was one of near perfection - walking in the beautiful Derbyshire Dales, with plenty of sunshine, fleecy white clouds in the sky, a clear atmosphere for good views and a gentle breeze to keep the flies away. There are many good paths to walk in this area, away from the very popular ones.

Contrast that summer day with one a few weeks earlier, when it was the Peak & Northern Long Walk. Rain started to fall steadily before the walk began, continuing until about an hour before it ended. Trudging through uncut hay fields, with the long grass obscuring the path and with water running down the legs and into the boots, it soon became obvious that this was not going to be one of the best walks of the year. But Peak & Northern walkers are a tough bunch and we carried on to the end, prompting the leader to suggest that he may be nominated for the worst walk of the year award!

On a more serious note, you will read elsewhere in ‘Signpost’ about a campaign by British Cycling for all Public Footpaths to be open for use by cyclists. This is where there is a need for a little understanding, as a number of PNFS members are, or have been, cyclists. However, at a recent Management Meeting, following discussion, it was decided to oppose the campaign. We all like to walk our footpaths in peace and safety, able to stop and look at the scenery without fear of being hit from behind by a cyclist. With the creation of numerous cycle routes recently, both in the countryside and through urban areas, recreational opportunities for cyclists have never been greater. We hope that you will support our Officers and Trustees in their view that the nation’s Public Footpaths should remain for use by people on foot only.

It was with great sadness that we learnt of the death of Mike Barnes, our webmaster, on 8th September. Mike worked wonders with the website, an important part of the Society in the digital age and a means of communicating with younger people, as well as being a great source of information for Society members. Please see later in the newsletter for an obituary to Mike by Mel Bale, our recently appointed Membership Secretary, who has also very kindly taken over the role of webmaster for the Society.

It is also sad to report that Jack Burling, who became a Trustee of the Society again on his return from a decade in Cornwall, has had to resign his position because of ill health. Jack brought a wealth of knowledge and experience to the team, as well as knowing the right person to contact when help was needed, and who would make a good speaker at our meetings. We shall miss Jack and all he brought to the Society.

Next: Roly Smith on Wildness