It is with great sadness that we have to report that Mike Barnes, the society's Webmaster, died on 8th September of prostate cancer. Mike was a lifelong walker and outdoor enthusiast. Like many others before him, he first became aware of the society through its famous green signposts. He joined the society in 2006 and soon volunteered as a footpath inspector, covering a wide variety of parishes in Cheshire, Derbyshire and Staffordshire.

Mike was born in Southampton and having attended a number of different schools, went on to Cambridge to study Natural Sciences. University life afforded him the opportunity to develop a wide range of musical tastes which were very important to him throughout his life. Much later he was to design what he called ‘Mike’s Jukebox’, his own digital music system, many years before such things became commercially available. 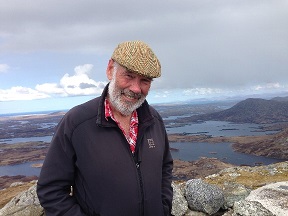 His first job after university was as a computer programmer with Hawker Siddeley Aviation. This was in 1969 when computing was still in its infancy and not particularly fashionable, but for Mike it was the perfect job. He had been bitten by the coding bug and it would stay with him and sustain him for the rest of his life. Eventually he started his own successful business developing 'shrink wrapped' software.

When Mike retired, he was keen to continue to use and enhance his programming skills. He helped support IT developments at the Princes Trust and he took on the role of webmaster for he society’s web site following the death of his predecessor Geoff Errington. Mike built on the strong foundations that Geoff had laid and over time introduced a number of significant enhancements. The most recent was a suite of Geo Data applications, which are enabling the society to take full advantage of digital mapping to monitor and protect PRoWs. He worked closely with other members to ensure that these applications met the needs of the society. It is a tribute to Mike’s enthusiasm and commitment that he was still working on the web site during the last few days of his life.

Mike devoted many, many hours to the society. He was passionate about footpaths and simply wanted to do his bit to ensure that others could enjoy them just as he had done throughout his life. The society is very grateful for all the work that he did on its behalf. Those who were fortunate enough to have known him, however briefly, have lost a good friend.

Mike's funeral took place at Stockport crematorium on 24th September. It was a very fitting celebration of his life. The society was represented by our chairman and a number of PNFS friends and colleagues.

Mike is survived by his wife, Rebecca and his two brothers, Peter and Derek.