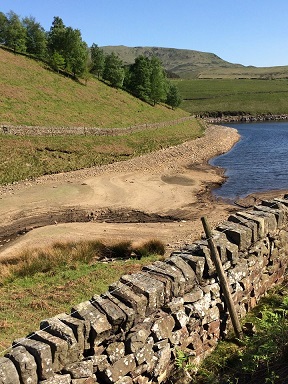 I sometimes think that we walkers are a bit like gardeners; the weather is never ‘just right’ for what we want to do. Of course many of us are both walkers and gardeners. In winter it can be too cold and windy, in Spring and Autumn it can be too wet and in summer it can be too hot and sticky. This winter has been quite dry, even though it has been wet under foot at times.

I make a point of looking at the water levels in the reservoirs as I walk around, and on the east side of the Pennines, at least three reservoirs never fully filled. There has only been one week during the whole of winter when I could not get out because of the weather. With the forecast for a dry summer there may be some dusty feet later in the year.

Our AGM in April was not as well attended as some years. Perhaps this was because there was nothing controversial on the Agenda. Nevertheless, it was a good meeting where members were able to hear about the ongoing work of the Society. Our speaker was Julie Gough of Friends of the Peak District who described the work that has gone into creating the Peak Park Boundary Walk, which will be launched on Saturday 17th June with an event in Buxton and a series of walks around the whole length of the route. By the time you read this, the launch event will have taken place and some of us will have experienced at least some of the many features of the park boundary.

Your Trustees are continuing discussions with a Solicitor on the way to make our Constitution more encompassing of the work we wish to do in a changed environment as far as Public Rights of Way are concerned. Less and less work is being carried out by Public Rights of Way departments, leading to a deterioration of path surfaces and overgrown vegetation. It has been noted that the Chiltern Society, an organisation not dissimilar to our own is far more proactive in footpath maintenance work than we are. There may be an opportunity for dialog between the two Societies to determine just how the Chiltern Society works with the local authorities in their area.

As I write this, preparations for the 120th celebrations of the opening of the Snake Path are almost complete. This will be quite an event for Peak & Northern Footpaths Society, as it is not often we have the opportunity to host such an event. Spread over two days, with the events in Hayfield on the Saturday, followed by the walk along the Snake Path on the Sunday, it should be a memorable occasion and a tremendous weekend. Again, when you read this, the event will have taken place, hopefully with plenty of memories.

The thanks of everyone go to Ian Salvage for all the planning and hard work that has gone into the event. Without Ian, this event would not have happened. Thank you Ian

Next: The Battle to Re-open the Path behind the Sea Wall