The Society reaches 120 Years of Age 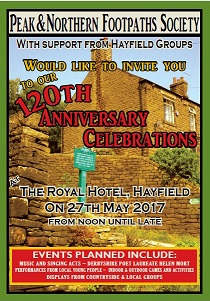 As David Bratt said in his welcome speech at the start of the celebrations at Hayfield on 27th May, “It is somewhat quirky to celebrate your 120th anniversary, but then the Society has always had a reputation for quirkiness”.

Notwithstanding our quirky nature, the day was a resounding success, with a variety of “performers”, displays and activities to fill the proceedings. During his speech, David Hurrell, together with the Chair of Hayfield Civic Trust, Sheila Booth, unveiled the plaque to commemorate our 120th Anniversary. The Civic Trust has generously donated half the cost of making and installing the plaque. It will shortly be installed on the Snake Path at Hayfield (SK 042 871), in the field above Hayfield that also contains ‘Twenty Trees’ a well-known local landmark). The Path is of course the scene of our first major victory in 1897, to keep it open for posterity.

The Mayor of High Peak, Matt Stone, was also warmly welcomed to the event by David, and enjoyed David’s speech, as well as subsequent ones by Hayfield Kinder Trespass Group, Moors for the Future and the National Trust. Prior to Matt’s arrival, we also had a presentation from Julie Gough, from Friends of the Peak District, about the new Peak District Boundary Walk, and its launch on 17th June.

A folk duo from Salford, Mather Robinson, gave us a half hour of excellent music, finishing up with a rousing rendition of ‘The Manchester Rambler’. Audience participation was rife during this.

On Sunday, two walks set off from the Royal Hotel in Hayfield, after a welcoming speech from David Bratt. A total of 85 people walked either a short 4 mile route or a longer 7 mile route (the latter featuring the stiff uphill struggle of William Clough!). Everyone seemed to thoroughly enjoy this, and also the get-together afterwards back at Hayfield, where Kinder Blue, a local band featuring one of PNFS’s own, Ian MacKenzie, performed a marvellous, relaxing jazz set in the afternoon sun bathing the Hayfield Cricket Club.

There were so many people that contributed time and effort to making the celebrations a success that it is impossible to mention everyone. Suffice it to say that there was a true coming-together of both PNFS and non-PNFS organisations and individuals. I feel sure that many relationships and friendships will have been made or re-inforced as a result.