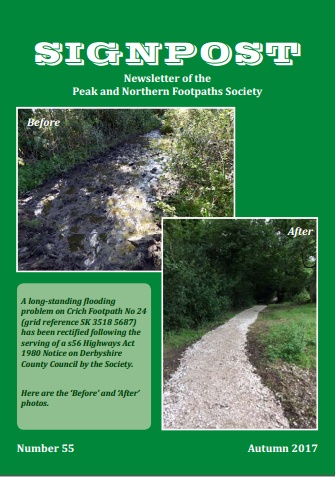 A word from the Chair
by David Hurrell

Summer has been and gone, and we have been left with confusing memories as to whether it has been hot and dry, or cold and wet. My recollection is that it started well with some hot days and a lengthy dry spell, followed by a much cooler and wetter period.

It won’t come as any surprise to members of PNFS, but walking is now officially and scientifically recognised as being seriously good for your overall health.

This Committee was set up in June 2017 to consider and report on the effectiveness of the provisions in the NERCA 2006, and how improvements could be achieved by new guidance or legalisation.

You will be aware that most, if not all, highway authorities have, over the past few years, drastically cut the resources which they give to the management of public rights of way (PRoW) and other countryside access.

Getting Started with Lost Ways
by David Gosling

Have you wondered how to start finding possible 'lost ways' (public rights of way not shown on the definitive map and therefore carrying no legal protection)? One start point is a current OS map showing recorded rights of way and 'Other Routes with Public Access' (ORPAs).

The Other Pennine Trail
by Ian Salvage

The Trans-Pennine Trail and the Pennine Way are designated via the word ‘Pennine’ as operating in the same region of England. However, they are very different in nature.

A look back at the Society’s activities 50 years ago reveals a variety of concerns, with some familiar themes interwoven with issues more related to the specific time. Quotes are from either the 1967 PNFS Annual Report or the PNFS booklet 'A Century of Footpath Preservation'.

Every so often though it is interesting to wander down an unfamiliar path to see where it leads. The same can be true of a website, so I thought I would describe some areas of the website that members may be less familiar with.

In October 2015, a new land owner closed a well-used track from the Bridgewater canal to Hall House Lane in Leigh, Wigan.

A brand new footpath for Bradfield
by John Harker

A new public footpath (number 221) was recently opened by Sheffield City Council (SCC) on their own land, in the National Park near Low Bradfield.

On Tuesday 26th September, I led a small walking group of eight OAPs. We met at Earl Sterndale, walking via Dowel Dale and Hollinsclough to Longnor, a very attractive former market town.

On a recent walk in this area I came across a blocked path, caused by building work on the site of the old Waggon and Horses pub at Mottram. 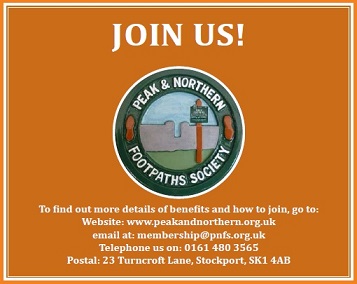 Signpost is edited and published for the Society by Ian Salvage, publicity@pnfs.org.uk. Postal: contact via Taylor House, 23 Turncroft Lane, Offerton, Stockport, SK1 4AB. Design and Print by Lymetrees (Tel / text 07984 059150).
The views expressed in this newsletter do not necessarily reflect the Society