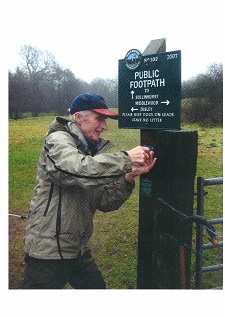 David Bratt and I attended the funeral of Brian Morrison on 25 January (12.9.34 – 9.1.18) at Stockport Crematorium. Brian joined PNFS in 2004, when he called in on spec one day, plus bike, to ask what we were all about and promptly signed up and asked for a job to do. He was well-known for his warm and friendly manner and his many bikes; I think he had 15! My favourite was a butcher’s bike, which he often used between his home in Offerton and Taylor House, when he needed a fresh supply of paint. He not only attended and led PNFS walks, but also became our man in the saddle, using his bike to get to signposts which needed repainting. He favoured those signs where he could get a cup of tea afterwards from one of his three daughters, before returning home to wife Margaret.

We last worked together on a sunny day in October 2008, when we fettled the last of our Dog Posts (19), which stands on the Snake Path above Kinder Reservoir. I always thought that cycling was his first love. In his prime he would cycle with a group to faraway places like Blackpool, but while the others returned on the train, Brian would cycle back home. Today I learned that bowls became his next sport and that he worked as a coal-miner, chimney sweep and chauffeur, but above all he was a devoted family man. We’ll miss him and of course we’ll also remember him with a smile and a memorial plaque on one of our signposts.

Our condolences go to his family.

Next: Talking about PNFS