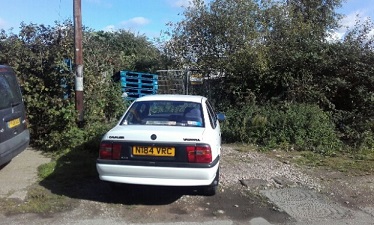 Shirebrook is a former mining town in the Bolsover District of Derbyshire, on the border with Nottinghamshire. Footpath 33 was added to the Definitive Map & Statement (DM&S) by an unopposed confirmed Order in August 2013. It had been impassable due to dense undergrowth since the mid-1990s. As I cover Bolsover District, I thought it time to check this ‘new’ footpath out. The first time I attempted to use the footpath was in early 2016 on a walk with a Society colleague. I thought it would provide a useful link from the local railway station, where we had alighted, to more open countryside on the outskirts of the town. At least it would have done had we found it! We could find no indication of it from either end in terms of signage. All we could see was dense undergrowth and fencing blocking the footpath.

I reported the problems in the usual way. Nothing happened. I found out that the work needed to restore the footpath had been costed up by the County Council in late 2013, but the work had never been sanctioned. It seemed to me that such a potentially useful footpath should be open and usable. I sought, and was granted, authority from the Society to initiate legal action should the County Council fail to act on my complaint. 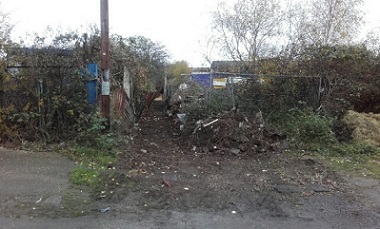 Staff changes in the Public Rights of Way section were delaying things. However, the new officer obtained a fresh quote for the work 12 months ago. Progress at last? Not yet, the bird breeding season was now upon us. A County Council Ecology Officer vetoed any work to clear the footpath. I could see the likelihood of restoring this footpath receding over the horizon. I served notice on the County Council under sections 56 and 130A of the Highways Act 1980 (surface out of repair and for obstructions).

Remedial works started in early November and have now been completed. ‘Before’ and ‘After’ photos show the difference. The question in my mind is will local people rediscover a footpath ‘lost’ to them for over two decades? Or will Footpath 33 slip back into the oblivion in which it was found by my colleague and I two years ago? The Society has done its bit. Now users must do theirs.

Next: The Footpaths Inspections Database