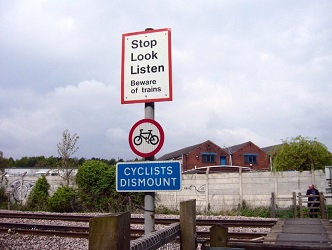 Do you go walking in Derby? Almost certainly not, but there are many public rights of way within the Derby City area which are well used by local people to get to shops, work, bus stops and other facilities. The public has the right to use public paths in urban areas just as they do in the countryside, and the Society’s remit to protect public rights applies equally to both areas. Megaloughton Lane is a highway which crosses the main Derby to London railway line east of the city centre by means of a pedestrian level crossing. Vehicular rights over the crossing were removed in 1967, making the lane a cul-de-sac for vehicles. The lane links suburban housing to the north of the railway to light industrial areas to the south, and before it was closed by means of a temporary legal order, according to surveys undertaken by Network Rail, it was fairly well used by walkers and cyclists. Network Rail has a national programme to close such level crossings, so that the speed of trains can be increased, and on safety grounds. There is specific legalisation available for this purpose, but to use it, it is necessary to have evidence that the crossing is unsafe for users. In the case of Megaloughton Lane, there is good visibility along the railway in both directions and there is no record of any accidents.

Network Rail therefore chose to apply to the City Council for the normal order to stop up a highway under s118 Highways Act 1980, on the grounds that the crossing is not needed for public use, as there are suitable alternative routes. The City Council made the order as requested, and five objections to it were received, including one from the Society. The council therefore sent the order to the Secretary of State to decide whether or not it should be confirmed. At the confirmation stage, the question of the likely future use of the path if it were not closed is relevant, and other factors, such as, in this case, the socio-economic benefits of increasing the speed of trains so reducing journey times, can be taken into consideration. The Inspector appointed to determine the order agreed with the Society that the route would continue to be used by walkers and cyclists, since the alternatives were close to busy roads and involved the use of steep flights of steps or a vehicular level crossing. He was not persuaded that Network Rail’s contention that closure of the crossing would contribute 6 seconds to the desired overall reduction of 8 minutes in the journey time from Sheffield to London outweighed the primary consideration of the continued use of the route if the crossing were not closed. The order was not confirmed. A victory for common sense.