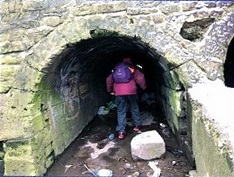 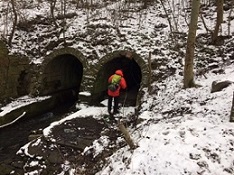 No - the three of us walking Wath-upon-Dearne footpath no 2 in Rotherham (see photos). People were obviously shorter back then, judging by the head room available in the tunnel.

The tunnel takes the footpath through and under a former aqueduct, which carried the Dearne & Dove Canal over the public footpath and the adjacent Brook Dike, which runs through an adjacent tunnel seen on the left in the second photo. The Dearne & Dove Canal was built in the 1790s to link the Sheffield & South Yorkshire Navigation with the Barnsley Canal, which in turn linked to the Aire & Calder Navigation near Wakefield.

Any other unusual locations for public rights of way out there?