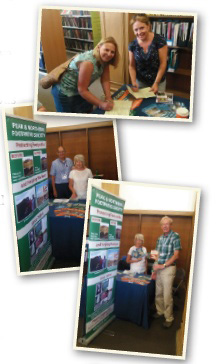 Having had good experiences in 2012/2014/2016 in terms of new membership recruitment, we ventured forth on Sunday 10 June to give MHF another go. The team comprised but three - my wife Beth, Gavin Miller and myself.

The outlook was not promising as this year we were not in the spa Manchester Town Hall (under massive renovation), but instead in the cramped Central Library. And instead of the usual 6 hours stint, this part of the Festival was limited to 4 hours. Our stall was off the beaten track and in something of a cubbyhole, but with a gangway running past. Not surprisingly, our estimates of new member sign-ups ranged from but 6 to a giddy 12.

At 12 noon the Festival opened to the public and we barely saw a s until 12:45, prompting mutterings that it was all down to Brexit!!. By now, the prospect of even 6 new members seemed the stuff of dreams. Then a burst of interest and 3 new members resulted.

By 16:00, we had amassed 19 new and very welcome members, not to mention the pleasure of meeting some existing members calling We gained 2 members from the nearby Salford and Manchester Ramblers stall and separately, in a quid pro quo (actually 2 quid), I somehow joined the Manchester and Stockport Canal Society!!.

All in all, a great outcome, proving that what our Society is about does resonate with the walking fraternity.

Next: The England Coast Path – Work-in-Progress