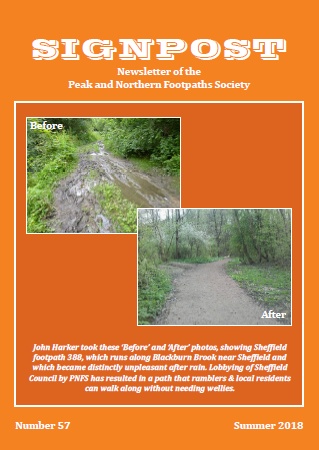 Spring this year has been the usual mixture of warm and cold days, before the weather can decide that summer is not too far away. However, this year has seen some of the most marked contrasts that I can remember.

Ginnels and Snickets - and lots more besides
by Caro Millington

When I saw the postcard in the Autumn Signpost featuring Belper jitties and asking if anyone knew other regional names for alleys, I realised I could help answer the question. Why?

Our walking group Bradford CHA, founded in 1903, welcomes people to come on our public transport and coach rambles.

We are very grateful for the recent significant legacy of £74,000 to the Society from the estate of Audrey Oakes.

No - the three of us walking Wath-upon-Dearne footpath no 2 in Rotherham (see photos).

Having had good experiences in 2012/2014/2016 in terms of new membership recruitment, we ventured forth on Sunday 10 June to give MHF another go.

As many of you may know already, the England Coast Path is being developed as a new long-distance trail.

Funding for New Footbridge Handed Over
by Bob Proctor

Last October a small ceremony was held at a new footbridge and boardwalk on Gunthorpe & Ingbirchworth FP2.

The Te Deum Stone is an historic landmark in Calderdale.

Jenny & David attended a public inquiry into the above in December 2017.

I knew about June Mabon’s work on Inspectors’ Badges, but I also suspected that she had been active in various other roles over the years.

Walking the Dales Way – a new edition of an old favourite

Dr Terry Marsh has recently written a new edition of ‘Walking the Dales Way’ covering this enchanting route through the Yorkshire Dales.

July’s longer walk (25th July) will start from Ilkeston, a station that closed many years ago but re-opened in April 2017.

Since 2007, National Park Authorities (NPAs) have had statutory powers to impose Traffic Regulation Orders (TROs) on any route that is considered to be at risk from damage, or is being damaged, by recreational mechanically propelled vehicles (MPVs), frequently called “off-roaders”.

My Favourite Café
by David Bratt

A tad quirky maybe, but my favourite café is located on Platform 3 of Stalybridge Station.

A New and Very Welcome Volunteer to the Team

Ruth Whaites takes on a new marketing role for the society.

Back in 2015 when I did the first parish inspection I missed a small gap on the map at the end of Shardlow and Great Wilne footpath 9.

Prompt action by DCC and landowner!

Signpost is edited and published for the Society by Ian Salvage, publicity@pnfs.org.uk. Postal: contact via Taylor House, 23 Turncroft Lane, Offerton, Stockport, SK1 4AB. Design and Print by Lymetrees (Tel / text 07984 059150).
The views expressed in this newsletter do not necessarily reflect the Society