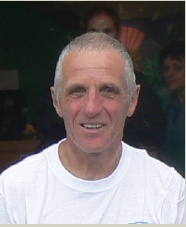 Neville grew up in Broadbottom, Tameside. After attending Hyde Grammar school, he obtained a degree in Psychology from Liverpool University. Nev spent most of his working life in teaching, retiring as head of English at Egerton Park High School in Denton, Tameside. The local MP for Denton, Andrew Gwynne, said about Nev during a debate in Parliament: "You never forget brilliant teachers... like Mr McGraw at Egerton Park Community High School in Denton. He got me through my GCSE English in 1989-90!"

Nev was a cricket player until his early thirties but found it taking up too much time. He seemed interested in my love of fell walking so I took him down to Manchester for his first pair of boots. They were from the YHA shop, long since gone. That was the start of a lifelong friendship. We walked in the Peak District, Lake District and abroad over the years. Nev also took up fell running but could not persuade me to jog along.

In our later years we started walking the National trails with another of my lifelong friends, who was a keen PNFS signpost bagger. Unfortunately he died nine years ago. As a memorial we decided to donate a signpost. Through this we became members of the Society. It was not long before David Bratt roped us into leading the long walks. We nearly always led the walk together, which was useful as one could act as a sweeper. I remember the first walk we led from Glossop. Lunch was at Crowden in a snow storm. We always seemed to get the December walk so it was not that unexpected. Recently Nev had missed the longer walks for over a year due to ill health. However he had recently regained his health and was back on the walks. His last walk was Dave Rigby’s walk from Slaithwaite in July. A week later he died in a tragic road accident whilst out for his morning run.

Next: Double the trouble - but no longer