A long standing footpath problem has at last been rectified after concerted efforts by PNFS. The problem on Glossop FP101 goes back to the 70’s. In his book “Pathwise in Glossop & Longdendale”, David Frith explains the end of the path, “from which one jumps down a wall onto Dinting Road”. Previous Footpath Inspectors have reported the problem to Derbyshire County Council (DCC). 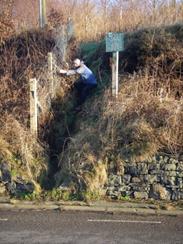 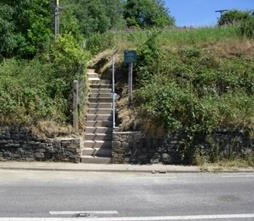 However, most credit should go to Bill Buckley, our past Membership secretary and now Inspector for Glossop. He reported the fault to DCC in Jan 17, whose form now allows a photo to be attached. This obviously enabled the Council to see how bad the path had become. Bill’s pressure on DCC finally resulted in this part of the path being rebuilt. In the ‘before’ photo, you can see Bill struggling down this part. The ‘after’ photo shows the results of our efforts. Some may say 18 months is too long a time scale to have these repairs carried out, but with local authorities on very tight budgets this must be considered a PNFS success.

Next: Heanor and Loscoe Footpath 160