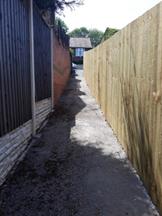 Footpath 160 is the path for which I was given authority to serve Form 1 under s.130AHA80. Derbyshire County Council (DCC) eventually managed to persuade the owner of the property on Lacey Fields Road in Heanor to reopen it through his property without me having to force the issue by serving notice. A substantial fence had been built, completely blocking the path.

The reopened footpath now runs as a gennel, with the fence that existed previously on the left in the photo and the new fence on the right. Thanks to Hilary Greenhough (DCC Rights of Way Inspector) for sending the ‘after’ photo.

Next: Going Underground in Leeds