Wortley is the southernmost parish of Barnsley. Shaped like a crudely hewn piece of the local gritstone its border seems to have been driven into the northern boundary of Sheffield as if it was a dagger! Why then is the parish not part of Sheffield. The answer lies in the history of the area. Almost two thirds of Wortley is currently owned by the Wharncliffe Estate, in fact most of the parish has been owned by one powerful family after another for over 800 years. The manor of Wortley can be traced back to the Domesday book where it was recorded as both Wirtleie and Wrleia. These names are believed to derive from Wyrta, the Anglo Saxon for vegetable and leah or ley meaning a clearing in a wood. Wortley and the neighbouring manors of Tankersley and Pilley once formed a single parish and it wasn’t until the nineteenth century that Wortley became one in its own right. 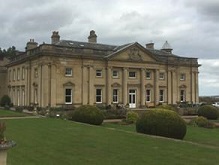 In 1252, the then Lord of Wortley was granted ‘free warren’ over his manor, thus giving him the sole right to hunt anything on his land. This led to the creation of Wharncliffe Chase which at that time covered most of the southern part of the manor. Early maps of the area suggest that the family home once existed on the Chase. Sixteenth century records show that this was abandoned and a new and probably much grander house, Wortley Hall, was built in the more sheltered area north of the manor. The present Hall was rebuilt in the mid 1750s.

It was commandeered for use by American soldiers during the 2nd World war, after which it was abandoned and became almost derelict. Ironically, the once stately home was saved by the National Council of Labour Colleges. An informal voluntary ‘army’ of trade unionists renovated the building and it reopened as a residential college in 1951.

The parish is a perfect place to walk. Most of the rights of way are in the north, around the village of Wortley and east of the area. They are generally in good condition and are relatively undemanding. The Chase itself has only become fully accessible since the enactment of the CROW act in 2000, before then entry was restricted to certain days of the week and Bank Holidays. The walking here is more rugged and possibly more interesting. It is some of the highest land in Barnsley and there are great views in all directions. The western edge of the Chase is bounded by the rugged Wharncliffe Crags, a path along which provides a great walk culminating at the impressive Wharncliffe Lodge. It is a former home of the owners and more recently the estate gamekeepers. The spring is an especially good time of year to visit the Chase, the air is alive with the sound of skylarks and with lapwings displaying.

This article is the first in a series of Parish Notes which will be published both on the website and in future editions of the newsletter. Any readers who would like to contribute are encouraged to contact the author at webmaster@pnfs.org.uk

Next: Seen on the Moors