PNFS has five footpath inspectors who have some strenuous paths in open and wild moorland areas of the High Peak to inspect. These paths are the highest paths in the whole of the PNFS area, all in the region of 600 m. We do have another peak in the PNFS area in north Lancashire, Gragareth (627 m) bordering on our boundary with North Yorkshire, but there are no public rights of way to inspect, though there are plenty of unofficial routes to use.

The northern most area is Black Hill (582 m) inspected by myself and Andy Leader. On the south side paths Tintwistle FP25 from Crowden via Laddow rocks following the Pennine Way and FP23 via Tooleyshaw moor, lead to the summit in my parish. From the north side inspected by Andy Leader, Holme Valley FPs 205 and 224 from Wessenden Head and FP206 from the A635 2.5 km to the west of Wessenden Head lead to the summit. Black Hill (see cover photo) has been much improved over the years. The highest part of the Pennine Way is flagged to the trig point and the area has been seeded by Moors for the Future transforming the area from knee deep bogs to pleasant grassy areas. 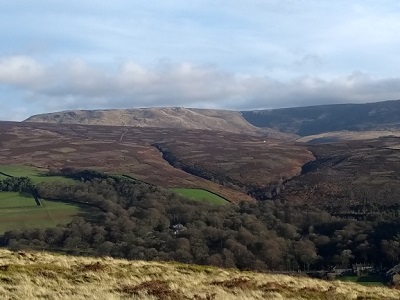 Kinder Scout (636 m) (see photo) the highest point is not actually accessed by a public right of way. The nearest being Kinder Low End (633 m) and Crowden Head (631 m). Kinder is inspected by Mel Bale (Edale parish) and David Eaton (Hayfield) parish. In the Hayfield parish FP78 goes from the top of Williams Clough via Sandy Heys, Kinder Downfall to Kinder Low End. How this area around Kinder Low End has been transformed by Moors for the Future is amazing. Large areas of grass where stark peat bogs used to be. From Kinder downfall FP79 leads to Crowden Head at 631 m. The southern access is via Edale FP38 from the top of Jacob’s Ladder to Kinder Low end and FP37 from Edale via Grinds brook to Crowden Head. Hayfield FP79 and Edale FP37 used to be the start of the Pennine Way, old route to the Kinder Downfall. Finding these routes through the peat hags and mist was not an easy task. It’s understandable that the route was made easier using Jacob’s Ladder and Kinder Low End.