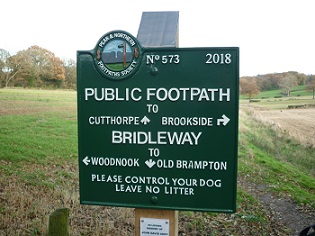 On 24 October 2018, PNFS signpost number 573 was erected. Located south of Linacre reservoir, Old Brampton, it is a special one for me because it is in memory of my much-missed parents, John David and Kathleen Addy.

Since I joined the PNFS in November 2015, I have wanted one of the Society's green signposts to commemorate my parents. However, its location had to have some connection or meaning that they would have recognised.

My paternal Addy forebears hail from Old Brampton. My father's grandfather John and great-uncle Edward lived at Moorhay Farm. Later, John and some of his relatives lived in the row of cottages known as Henpark, at Hollins. Edward emigrated to North America. My father, who was born in Ashton-Under- Lyne, visited Henpark as a child and often he used to explore the nearby countryside near Linacre reservoir.

Although I am the last twig of this particular branch of Addy - I have kept my maiden name - I am hopeful that some distant Addy relative may twig at seeing signpost 573's commemorative plaque.

I have yet to see the signpost but we have booked a week in the Peak District during the summer. I look forward to seeing it and on the way I shall sit on the stone chair on the A619 in Wigley. That's another story, but if you can read the carving on it, Sit ye down on chair by John Furniss of Moorhay Farm Wigley 1888, you can make yourself comfortable!

Next: The South Yorkshire Moors