The Footpath Inspections Database - An Update 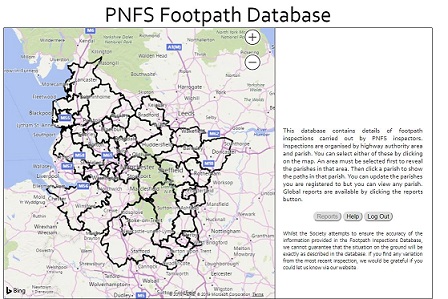 This article has two purposes. First it is an update on the tremendous progress that has been achieved in the roll-out of the Footpath Inspections Database (FID). Secondly it is about how the FID can be made more useful to PNFS members and PNFS footpath inspectors. We are convinced that thanks to all the hard work that has gone into designing and populating the database it is a really useful tool for all walkers - and a unique benefit for PNFS members.

Almost all the PNFS area is now covered by the FID as the picture below shows. In fact, it covers all Highway Authorities where we have any inspectors. Faults data from the old faults log have been transferred to the new database with only a few old reports still to be recorded (from the period after Hilda Bowler retired). 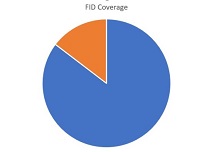 In November last year, the FID was re-launched with a new design. Now you can see an overview map on the right of the screen as well as the list of paths on the left side. The new font is clearer, and various changes behind the scenes by Roger Fielding make the experience of using the FID quicker and more robust. It can be viewed on a smart phone or tablet, though it is primarily designed to be used on a PC or laptop.

Of course recording of inspections is variable. The Society cannot require inspectors to record their inspections on the FID. It can only make the case for its value and let each inspector decide whether to use it. Fortunately most say they love it and believe it is a big asset for the future work of the Society.

Now, coming to the second point. The FID could be better used by members. You only have to get a password from Mel Bale (email: webmaster@pnfs.org.uk) and you will have full access to all the data on the FID. The maps show you all the rights of way in the parishes covered by the FID, and also the information about the state of the paths. This is an invaluable tool if you are planning a walk. Many reports include a photo as well as a description of any problems. All members are entitled to full read-only access to the FID - but you will need to get a password.

For inspectors, the FID is obviously a great way to keep a record of the paths you have inspected, when they were last inspected and whether any problems were found. But there is another facility, which is not being used as much as it might be. This is the ability to record an event relating to the path. What is an event? Examples of an event are: - when a fault was reported, - the response from the HA including a reference number, - any further correspondence relating to the path, - any closure or diversion of the path.

Events like these can be added to the FID using the 'Add an event' button. This button appears when you click on 'edit' on a report. Remember you can always go back to a report and edit it by adding a photo, adding an event or amending the description or the location of the fault.

A record of events like those listed above is invaluable if ever the Society needs to present evidence to the Highway Authority about a failure to respond or if it is considering legal action.

Finally, a big thank you to Roger Fielding, the PNFS member who has designed the database and made it available for our use.