Sydnope StandWhen William the Conqueror’s Domesday Commissioners passed through Darley and honoured it with four whole clauses: “King's land formerly King Edward. Church. 2 sesters of honey. £40 of pure silver” they would have noticed the yew tree, which was already nearly a thousand years old. You can still see The Darley Yew today in St Helen’s churchyard, near the graves of Sir Joseph Whitworth, the famous mechanical engineer, and his wife. The Whitworths lived at Stancliffe Hall and were responsible for developing the village of Darley Dale, the Whitworth Hospital and the Whitworth Centre for leisure and education. After Lady Whitworth died, Stancliffe Hall became a school, but recently it has returned to private ownership. 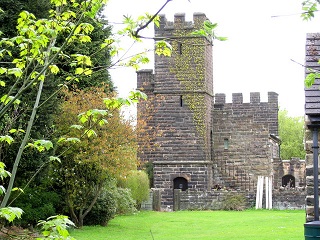 The parish of Darley Dale is bordered on the west by the River Derwent. The Derwent Valley Heritage Way passes by St Helen’s Church on its route from Long Eaton to the Ladybower reservoir. In the summer, the haunting hoot of a steam whistle echoes up from the valley as the Peak Rail steam trains pass through Darley Dale station. The line runs from Matlock to Rowsley along part of George Stevenson’s original railway from London to Manchester. Close to the station is the Red House. Previously an extensive Carriage Museum and carriage driving school, it still offers the opportunity for a ride in a real carriage drawn by film-star horses.

Just across the A6 are the former grounds of St Elphin’s girls’ school. The old school building was originally the Darley Dale Hydropathic Establishment but was bought by the school when it moved from Warrington in 1904. The stables were converted and dedicated as the Chapel of Our Lady and St Elphin by the bishop of Southwell. The most famous pupil of St Elphin’s was Richmal Crompton who wrote the Just William stories. The school is now an up-market retirement home, and the chapel has been deconsecrated.

North of St Elphin’s lies the village of Two Dales. It used to be known as Toad Hole, but in 1850 the rector decided that the name was undignified and changed it. To the east of the village is a complex of two mills, originally a cotton mill and a flax mill built by Daniel Dakeyne in the 18th century. Ladygrove mill was later used for lace and then animal feed. The mills were powered by water from three reservoirs in the valley. The Dakeyne family were responsible for much of the prosperity of Two Dales.

Beside the village, Hall Dale Brook and Sydnope Brook become Warney Brook and flow down to the Derwent. Both Dales have attractive footpaths through their wooded valleys. Circular walks can be completed through Hall Dale using Bent Lane, and through Sydnope Dale using Butcher’s Lane and Back Lane. At the head of Sydnope Dale lies Sydnope Hall which was extended and remodelled in Tudor style by the 19th century physician and traveller Sir Francis Scheverell Darwin. He also built the unusual Sydnope Stand which is a residential house on Farley Lane that looks like a castle when viewed from Sydnope Hall! The nearby Forestry Commission woods on Darley Moor are a popular place for a less demanding stroll. If you are very quiet, you may even see the occasional Red Deer.

This article is part of a series of Parish Notes which will be published both on the website and in future editions of the newsletter. Any readers who would like to contribute are encouraged to contact Mel Bale at webmaster@pnfs.org.uk