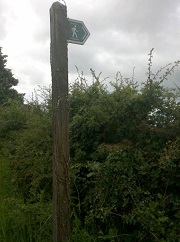 In June 2017, I reported an obstruction on the above Ribble Valley path to the Lancashire County Council. The stile was completely obstructed and concealed by a hedgerow on Whalley Old Road and blocked by domestic clutter at its other end at the bottom of a slope. Although the LCC acknowledged my report, nothing was done so I contacted them again in October 2017. I then received a predictable response stating it was 'experiencing a vast increase in the number of reports of this nature and unfortunately resources continue to be reduced.' The matter was then passed to Courts and Inquiries Officer, Jenny Allen. In January 2019 I was told by the LCC that FP29 had received new gates and steps installed from the road.

When I visited the new gates, my initial thought was that the roadside one looked over-engineered. However, I have to say that the LCC have excelled themselves and they also added well-constructed steps from here. In time, the gate will get weathered and blend in with the countryside landscape. 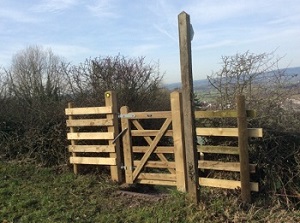 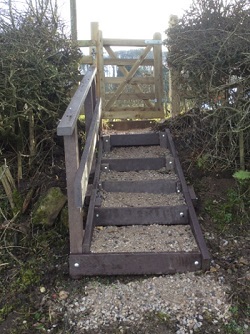 As Jenny says, it is taken them a while but hurrah that's now done!