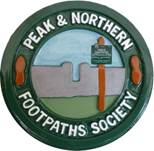 Walking in the countryside can present all sorts of challenges. Most can be expected and others are sometimes surprising. A few weeks ago I was seated on the grass at the side of a bridleway having a drink of tea, when I heard a shout, ‘will you stand up please’. Looking up there was a young lady riding a horse down the lane who had stopped to call to me. ‘Why should I stand up?' I replied. ‘Because the horse is frightened of you’. ‘If I stand up the horse will be even more frightened’, I said. ‘Will you stand up so I can come past’ was the reply I got. Reluctantly I stood up. ‘Now don’t move until we have come past’ was the command I got. The horse and rider came slowly past. No other words were spoken. In all my years of walking I have never been asked to stand up for a horse to pass. I anticipate that others may well have had similar experiences, but for me it was the first.

Walking around the parish of Hunshelf recently, I walked through the village of Green Moor, indeed the only village in the parish of Hunshelf, and the village where the parish council meets. The PNFS is fortunate to have a parish councillor as a member, and he is also a footpath inspector. I was surprised to see wonderful display of flowers in many places around the village and a number of villagers working on the displays. On asking why there were so many flowers around the village, I was told that Green Moor had entered the Britain in Bloom competition, and that the judging would be towards the end of July. By the time you read this article the judging will have taken place and the results known. However, there has just been a night of thunderstorms with torrential rain and high winds so I hope the plants will have survived the onslaught. The eastern Pennines can be a harsh place at 1,000 feet above sea level. I wish the villagers well in their endeavours. 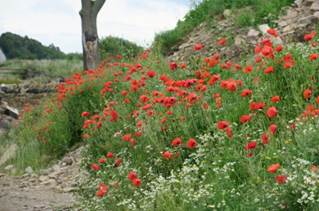 One of our recent successes has been the installation of a third toposcope on the summit of Win Hill. The Peak District does not have a peak, as most of the high ground is relatively flat. Take the example of Kinder Scout, which is a flat summit, and one of the highest points in the Peak District. However, Win Hill does have a peak in that the elongated top can be seen from many different angles and does look like a peak.

Our thanks go to our Signpost Officer, David Morton for the work he has put in to get it there. This was no easy task, both with the manufacture of the metal plate, and getting the required materials to the top. There was also waiting for a period during the spring when he could be sure there would be no frosts that would damage the concrete. The toposcope is in memory of Geoff Errington, and would have been a lasting reminder for his partner Ruth Cuzens. However, the sad fact is the toposcope was stolen shortly after it was erected. We had hoped this would be a memorial of the work that Geoff did for the Society in his position as a footpath inspector and webmaster. The Trustees will decide what we need to do as a replacement reminder of Geoff.