A Walk in Virtual Reality 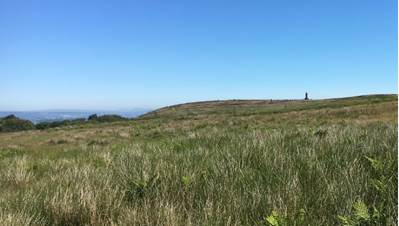 Life is never that simple when technology is involved. In my youth I used paper maps and a compass to guide me. These low-tech navigation aids were pretty good, though high winds, driving rain and thick mists made them a challenge to use at times. Walking The Pennine Way across Cross Fell taught me never to rely on technology alone. I got lost in cloud and high wind and had to cautiously find the path again, ever worried about venturing too close to the screes that ring the summit. Many of us will have had similar experiences. Had GPS been available back then I’m sure that it would have guided me safely back to my route, but relying on that single technology alone would also be folly.

Whilst digital maps and GPS eXchange format (or GPX) files are now widely used, they have their own peculiarities. I recently tried to send a GPX route file to a friend, only to find that he couldn’t open it. After a lot of head scratching we discovered that my software was using UTF-16 character encoding whilst his could only read files encoded with the earlier UTF-8 standard. Eventually we managed to convert from one UTF standard to another and all was well. Whilst trying to fix this problem, I stumbled across Google Earth’s ‘.KML’ files. These files allow walking routes to be shown as tracks in Google Earth applications. In some areas of the UK Google Earth can now display detailed 3D images, so you can view a virtual reality world and look around at ground level. 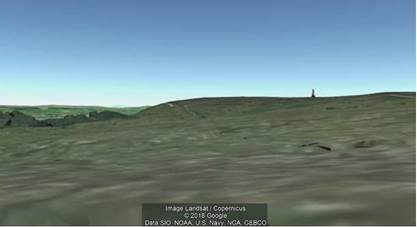 I took this picture during a beautiful summer’s day walk across the Darwen Moors in Lancashire, which took in many of the PNFS signposts in the area. The Jubilee Tower above Darwen rises on the horizon about ¾ of a mile away. I was standing at SD 673 204 [53.67983,-2.49552] on 27 June 2019 at 10:17 in the morning when I clicked the shutter. Back at home I managed to convert my GPS track logging GPX file into KML format and then retrace my route in Google Earth’s virtual reality world.

Below is the same view. The horizon matches the same contour and the woods to the left of the image have the same profile. In Google’s virtual reality world perpetual summer reigns, with blue skies and trees in leaf. Close to your viewing point it can’t render foliage accurately and you’ll notice that atmospheric bluing in the far distance, beyond Darwen and above the tree line, is missing. However you’d certainly be able to recognise where you were in the virtual world. It’s a truly astonishing feat of technology, that I certainly couldn’t have imagined possible in my youth.

I’m waiting for a really thick fog to descend on Cross Fell again, and then I’ll be able to stride out confidently wearing a virtual reality headset to keep me on track in Google’s perpetual summertime. It’s not as ridiculous as it sounds, I’m sure apps will be reaching our Smartphone’s sometime soon!