Summer has seen a lull in definitive map modification order applications partly caused by Derbyshire County Council being rather slow to register the most recent but more so by my desire to get out walking. Mind you even this creates office work with more gaps and unrecorded paths being discovered. I've also been working on a project with Friends of the Cromford Canal who wish to promote and improve footpath links to the disused canal that they wish to open up again. Close by a village wanted to create a history walk and asked me to advise them on a route. I learnt a lot about the history of Ironville in the process.

Alabaster Lane shows on Ordnance Survey and has a footpath ending at the lane a good pointer to a route with public rights. The Finance Act of 1910 identified on a map taxable land with coloured borders. Public highways were left blank as was Alabaster Lane this supported the application along with the Tithe Map. 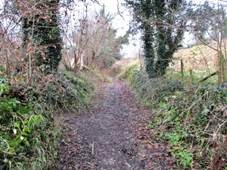 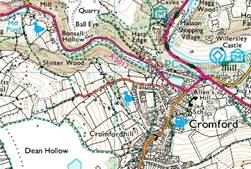 So where are we with unrecorded paths in Derbyshire? I now have a list of eighty mostly in the south of the county but I have two in Glossop that need sorting and there may be more up there if only there was more time. I met a chap in the Records Office, not a serious walker, but he felt the project is worthwhile. He has been scanning OS maps and is now making copies of material at the Derbyshire Records Office so that he and others can investigate at home. DCC are very slow registering applications and I want to complete one before submitting the next. When the weather keeps me indoors I have six more applications ready to fire off. 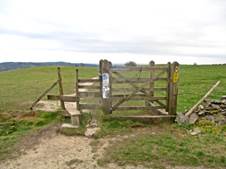 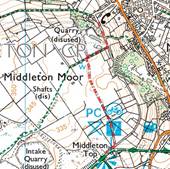 The Moor at Middleton by Wirksworth grew like Topsy spotted because two footpaths meet an unrecorded track. Due to quarry working on the moor the route had been subject to  Quarter Session Diversion Orders which offer very good evidence of public rights. 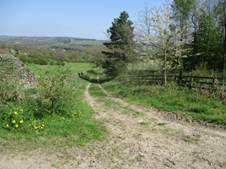 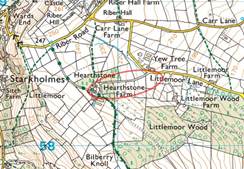 Littlemoor Lane shows up as a track on Ordnance Survey. The Matlock Tithe map is fairly unusual in that the roads are allocated a number and these are awarded as public highway to Matlock Parish, fairly good evidence backed up by other souces gave the green light for a Definitive Map Modification Order.

One very useful source of evidence for gaps or routes of higher status is the 1910 Land Valuation maps so it was a boost when the British Horse Society reported their plan to copy all the Derbyshire maps at Kew. DRO has a good but incomplete set of the working copies while the Kew copies carry more clout and cover the complete county. It is therefore further good news that Peak and Northern Footpaths Society has agreed to fund copies at Kew of the Staffordshire map. There is however a big but because we also need volunteers to seek out unrecorded routes in Staffordshire and make use of the resource to submit DMMOs where appropriate. Are you up to that task? Names please to David Gosling on email inspection@pnfs.org.uk.

Next: Movies of PNFS Walks