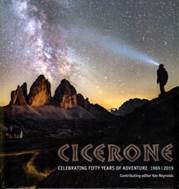 Many members will own several of Cicerone's outdoor books and be interested that the publisher celebrates its fiftieth anniversary this year. To mark the occasion, Cicerone has published a commemorative book, Celebrating Fifty Years of Adventure 1969-2019. Produced in large hardback, this is a superb compilation of adventures specially written by many of Cicerone's authors.

Of much interest to me as an erstwhile publisher and editor of several magazines is the story of how Cicerone was founded in 1969 by two couples over a dining table. Cicerone means 'guide' and the company's first book was The Northern Lake District by G A Hassall (now out of print, but available as a collector's item at £20). This book was reprinted many times - reputed to have been due to the colour of its cover making it invisible when dropped in the snow so climbers would have to buy another copy!

Unlike works of fiction or history that require no regular updating, a guide to walks, treks or climbs is of any use only if its information is accurate. Hence, whenever a route alters, for example, due to destruction by rockfall, avalanche or flood, it rests upon the author to include these changes in an updated or completely new edition. This continuous 'ownership' by the guidebook's author and publisher sets Cicerone apart from other publishers. Several titles have been in continuous updating and reprinting for forty years. It is testimony to its business ethos and close relationships with its writers that it survived both the mouth and foot epidemic in 2001 which saw sales of outdoor books plummet and the financial crash of 2008.

Fifty adventures form the bulk of Celebrating Fifty Years of Adventure 1969-2019 and over twenty are set in the UK, followed by the remainder in Europe and elsewhere. These are evocatively and succinctly written and accompanied by the authors' own photographs. Members will recognise the names of some of these contributors, such as Terry Marsh and Paddy Dillon. The book concludes with a collection of mishaps and misadventures survived by several Cicerone authors.

Congratulations go to Cicerone for reaching their fiftieth anniversary and producing an excellent book. Celebrating Fifty Years of Adventure 1969-2019 was a delight to read and hold. It would be a splendid addition to libraries of Cicerone fans and armchair adventurers. It would also make an attractive Christmas present to lovers of the great outdoors.

During 2019, Cicerone will donate £1 per book sold on the Cicerone Website to two charities, the Bendrigg Trust and Juniper Trust.