Any self-respecting rambler in the Peak District will know something about Edale Cross (grid reference SK 07717 86099) on the edge of Kinder Scout as it has been a landmark on the old packhorse trail between Hayfield and Edale since the twelfth century. The medieval cross, also known as Champion Cross, is cut from local gritstone and was probably erected by Cistercian monks around 1157. It once marked the boundary of the former Royal hunting grounds of Peak Forest but today serves as the parish boundary marker between the villages of Hayfield and Edale. 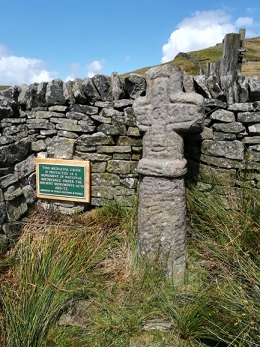 According to Historic England the cross may once have had a taller column and folklore records that the shaft was once thrown down and damaged. Local farmers are reputed to have recovered the cross in the early nineteenth century re-erecting it in its current position. However, there are carvings on the stone which may belong to the seventeenth century so in reality the true story of the cross remains a little dubious.

The cross is now protected by drystone walls on three sides which also provide an ideal alcove for a sheltered lunch stop when rambling in the area. I?ve passed the cross dozens of times during my walking career but it wasn?t until a recent lunch stop that I first noticed that the metal information plaque associated with the monument was deteriorating significantly. The words were barely readable, three of the four fixing screws were missing and its wooden mounting had rotted to pulp.

I discussed the situation with a couple of walking friends and we resolved to do something about it before the plaque eventually disappeared. I contacted Historic England by email offering to refurbish the sign and then waited a few days for a response. I didn?t really think they would want just anyone mucking about with their monument but, much to my surprise, Historic England was very encouraging and granted permission to carry on. I thought we were just volunteering to repaint the plaque but when we recovered it from the cross we realised there was significant bending and cracking in the metalwork. Repairing this was going to be beyond our amateurish skills.

During recent months I had been in contact with the PNFS to arrange sponsorship of a memorial signpost (S582) to be placed on The Roaches in Staffordshire. The help of Footpath Officer, David Morton, was invaluable in arranging that and it was whilst I was in conversation with him that I mentioned the Edale Cross plaque. David put me in touch with Leander Architectural of Dove Holes, Buxton, who produce the PNFS?s signs and are based within three miles of my house. 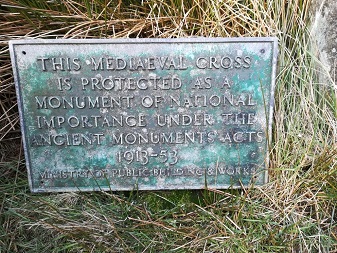 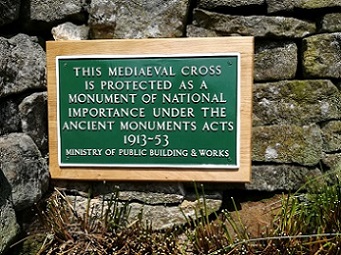 I quickly arranged a visit to Leander and I was amazed that they were able to tell me all about the plaque. The plaque was manufactured by The Royal Label Factory of Stratford upon Avon which merged with Leander Architectural in 1998. Therefore the original purchase order details were still on record enabling the new paint work to match exactly that of the original specification. Leander repaired the damage and sandblasted the plaque before applying a base primer and two top coats of the correct paint. That just left me the lettering to repaint with the special protective paint also supplied by Leander. I owe a huge thanks to the manager at Leander for carrying out the work at what was I?m sure a hugely discounted price.

The completed plaque was mounted on a piece of well-seasoned English oak before being returned to its rightful position alongside the cross in late July. Without the help of David and PNFS this project may not have had the successful conclusion it deserved. Thank you.