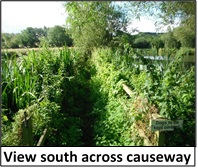 Many PNFS members will be aware of gaps in the RoW network where paths do not meet up. This extract from the current on-line OS Explorer map seems to show an example. It depicts part of the Bardsey/East Keswick area of north east Leeds. Two Public Footpaths head towards a pond (part of a fishery accessed from the bridleway to the west), but come to an end on reaching it. However, the OS map is wrong on two counts. Firstly, there is a continuous RoW from the southern bridleway up to the road past Old Hall Farm, apparently passing through the pond en route. Secondly, you will not need a pair of waders - or a boat - because there is a causeway across the pond along which the RoW is waymarked. The causeway is definitely not a recent development as there are two large trees growing on it. The Leeds RoW Unit has confirmed that the RoW has existed since at least the 1950s when the Definitive Map was drawn up. I have asked them to assess whether the trees have any long term implications for the stability of the causeway.

The 1974 OS Pathfinder map correctly showed a continuous RoW but then there was no pond. From 1991 onwards Pathfinder and then Explorer maps have shown the pond and the erroneous gap in the RoW. People (presumably local) are walking the path. I saw evidence of use particularly on the northern half. I had walked in the area previously but not bothered with this path because of the gap on the OS map. Having recently become an Inspector I set out to be as thorough as possible and was pleasantly surprised with my 'discovery'. Incidentally, I also reported a missing stile at the fence just south of the pond and one has now been provided. 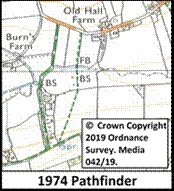 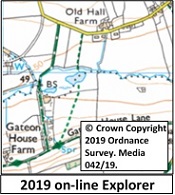 I have found three other examples in the same area of paths being shown incorrectly on the Explorer map. In one case only 150m of a 500m long bridleway is shown. The missing part goes along an unadopted road in an area of rather exclusive housing. There are CCTV cameras galore and a snarling dog behind many garden gates. It is the kind of place where someone might be reluctant to walk through without the assurance offered by seeing a RoW marked on an OS map. In each case the Leeds RoW Unit has said they will ask OS to correct the Explorer Map.