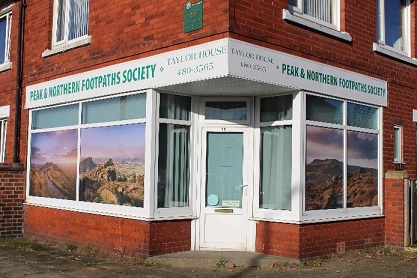 In October 2017, a Strategy Day was organised by David Gosling to discuss ways in which the PHFS could extend its activities in new areas or do things differently or better. I was one of the inspectors who were invited to attend, along with the Society's officers. During the day, I suggested that photographic film showing our countryside be placed over Taylor House's front windows. This would act as an advertisement to what PNFS is about. There were many other ideas generated on the Strategy Day so it was a while before my suggestion received full consideration. 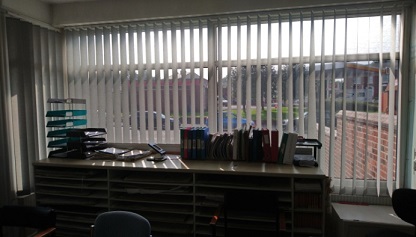 I was delighted to learn that Taylor House's front and side windows now display splendid colour images. Three high resolution photographs were selected of the Great Ridge above Edale, the Roaches and Higger Tor, from the portfolio of Peak District photographer, Michael Cummins. The images are printed on Contra Vision perforated film, which displays the images from the outside while retaining see-through clear vision from the inside. Cee Graphics installed the images on the windows. As well as improving the appearance of Taylor House, the 'new' windows mean that volunteers who work on Mondays now enjoy privacy and much reduced glare on bright days.

Next: It was dry when we started the July Longer Walk