G H B Ward was a very early (pre-WW1) inspector for PNFS - indeed the only inspector east of the Pennines. On his death in 1957, his will left £36,000 to the Hallamshire Footpaths Society which he established before the Great War and which was affiliated to PNFS. He was its chairman. The society folded up not long after his death and voted to give all its assets to PNFS.

Information board shown on the Five Weirs Walk along the river Don in the east end of Sheffield near Meadowhall shopping centre.

This bequest could not be honoured until his last surviving daughter died in the early 2000s. The executors, a firm of solicitors, did not know what to do with the œ36,000 as the Hallamshire had disappeared. Fortunately, I heard about the will and I knew the history of the demise of the Hallamshire and alerted the late Adrian Littleton to this potential windfall. The solicitors agreed that since the PNFS had taken over the assets of the Hallamshire in the late 1950s, it had a legitimate claim to the money bequeathed to the Hallamshire. Hence PNFS were œ36,000 richer. Serendipity at work. 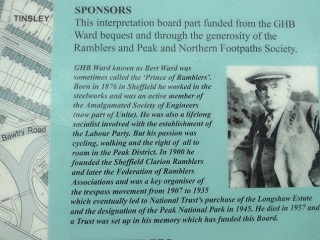 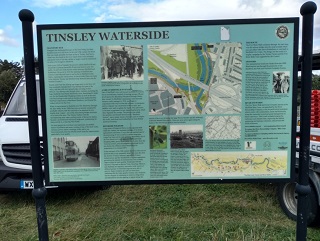