Reopening a Path in Calderdale 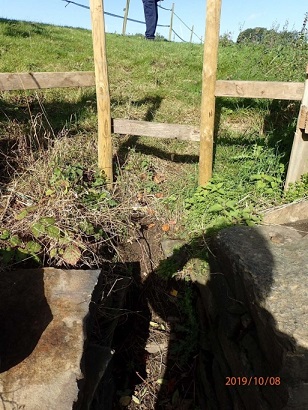 I was approached by our inspector for Brighouse in Calderdale who was concerned about the obstruction of a path from Lees Lane to the Whitehall Road (A58). Whilst only 121m long it is a very useful link being opposite a path emerging from Lightcliffe golf course. Most importantly it takes walkers away from the horrendous noise of traffic along the A58. The inspector had included the path in a book, 'Country Walks Around Brighouse' published by Brighouse Civic Trust in 1973. Checking council records revealed that the path was not included on the Definitive Map but in May 2013 was subject to a claim for public status on the basis of 20 years use as a public footpath. The claim was due to be determined in 13 or 14 years i.e. 2030 to 31 which was outrageous. However if such a claim has not been determined within a year the applicant has the right to ask the Secretary of State to direct the Council to reach a decision within a specified time, usually from 6 to 18 months. Such decisions are delegated to the Planning Inspectorate.

Councils usually have a priority system whereby each claimed path is allocated a ranking in the list of outstanding claims. Our path was in place 65. Until a few years ago directions were routinely refused if the Council had applied its priority criteria appropriately even if, as was normally the case, it meant the matter would not be decided for many years. Now however the Planning Inspectorate has changed its approach and it routinely grants a direction. Rights of way activists have taken advantage of this change and applied for directions in so many cases that some highway authorities, eg Kirklees, have had to appoint additional staff to cope with the work load.

In our case the applicant proved somewhat elusive. She had moved house and married. Eventually however she was found and was very pleased to agree to apply for a direction with the assistance of the Society. This was duly granted and the application determined within the specified period. The applicant's case was accepted and an order made to add the path to the Definitive Map. Fortunately this was not subject to any objection so could be confirmed by the Council. The path is now open again and recorded on the definitive map as Brighouse 157.. Unfortunately, unlike the case with a diversion, there is no obligation to comply with the Equality Act by providing path furniture which complies with the appropriate British Standard. The stiles at the ends of the path are of a very poor standards and the stone steps off the A58 need clearing of vegetation to make them easier to use. Also no signpost has been erected. Such an unsatisfactory result is largely because of the Council's getting rid of almost all public rights of way staff in Calderdale.

All Councils are obliged to produce a register of applications for Definitive Map Modification Orders which is available for inspection on line. There may well be over a hundred, some of which will never be determined because of either the death of the applicant or of the witnesses who have provided statements of their use of the path being claimed.

I would urge all inspectors and others with knowledge of paths in their area to inspect the register and inform the Society of any which you consider particularly important. If there is likely to be a significant delay before they are determined we will work with the applicant to apply for a direction. Many of the claimed paths will be cases where the path has been used for many years but has been closed by the landowner. Until the path is recorded on the Definitive Map neither the Council nor the Society can take steps to enforce the law to reopen the path.

Photograph shows the start of the path from the A58.

Next: Book Review: How to Draw a Map