Book Review: How to Draw a Map, by Malcolm and Alexander Swanston, published by Harper Collins

If like me you have a life long passion for maps you will probably find a book titled 'How to Draw a Map' hard to resist, but beware and remember the old adage 'Don't judge a book by its cover' or more accurately, in this case, its title. Don't get me wrong, this book by father and son pairing of Malcolm and Alexander Swanston is a good read and probably just about worth your hard-earned cash, but the book's subtitle 'A Mapmaker's journey through history' is a more accurate description of the book. The text doesn't offer any serious help to the modern-day cartographer, whether they be an amateur or a profession as to how to create their own map. 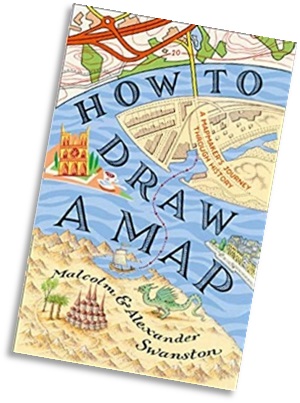 As with any disappointment perhaps the best advice is to find the positives in what you have before you and there are certainly plenty to be found here. The book contains 65 maps, they are contemporary black and white representations of historic maps drawn by Alexander Swanston. The original maps range from the earliest known map of the 'world' produced 4,500 years ago, through to ones created by Ptolemy (c. 150 CE), the Anglo-Saxon Mappa Mundi (c. 1040 CE), Mercator's World Map (1569 CE) and many more.

The early part of the book shows how exploration and map-making were inextricably linked. When we set out to explore somewhere new today we may have a paper map with us, more often than not we also have the convenient backup of an electronic map that not only confirms where we really are but also tells us what is all around us. The original map makers had no such luxuries. The reasons for their explorations were to produce maps that others could then use for their own purposes. The book describes how maps afforded the privileged the power to exploit both other peoples and other parts of the world.

Later chapters deal with the importance of maps during wartime and cover both the First and Second World Wars in some detail. Accurate maps were vital during the conflicts and needed to be constantly updated to show the positions of opposing forces.

Sadly modern cartography is almost entirely absent from the book. There are only a couple of mentions of GPS and GIS (Geographical Information Systems) and the enormous benefits and potential of both technologies are barely mentioned. Such omissions limit the appeal of the book and are opportunities missed.

I did enjoy the book. Whilst it doesn't live up to its title it does provide a useful history of some aspects of map-making. However, it is hard to escape the feeling that with a little more effort, such as the inclusion of some of the original maps and an index, the book could have been even better. I recommend that you browse it yourself before deciding whether or not to buy it or indeed put it on your Christmas list!