One of the casualties of Storm Frank, which swept across the North of England on Boxing Day 2015, was Dinckley footbridge. This was a suspension bridge constructed by the Lancashire County Council in 1951 but was damaged beyond repair by severe flooding of the River Ribble. I visited it a few days after the storm and found its cables, planking and rail to be quite twisted. As an indication of how the Ribble had risen there was much vegetation wrapped round the bridge.

There are two public footpaths leading to the bridge, from Hurst Green and Dinckley, but it is not a PROW, presumably because it is owned by the LCC. The new one was opened in April 2019 at a cost of £1.5 million which was provided by the Department of Transport. As well as being of rigid construction and higher than the old one, it has a long ramp at each end for wheelchair or mobility scooter users. Whilst many walkers may have preferred the more graceful original bridge as painted by my late father, some may not miss its swaying motion. 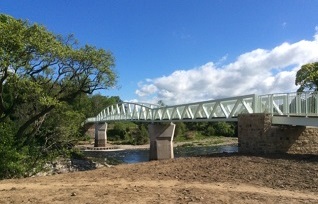 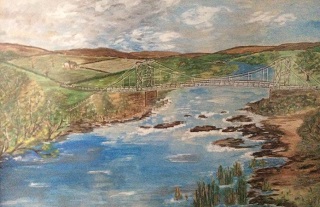 Next: PNFS Request for Help