Trials and Tribulations of a Footpath Inspector

I have recently taken over inspecting rights of way in Longdendale in the borough of Tameside. This turned out to be quite a contrast to Tintwistle in Derbyshire that I also inspect. To be fair, Tintwistle only has 23 paths, mainly moorland with few stiles and gates and a section of the Pennine Way that is well maintained.

Longdendale, although in Tameside, is a fairly scenic area covering Hollingworth, Mottam, and parts of Broadbottom, 95 paths in all. I found over half the paths have some faults ranging from no signs from the highway to a washed-away footbridge. This was the main problem in the parish. It appears there had been no bridge on FP4 in Swallow wood for over two years, and reported by the previous inspector Pat Thomas a number of times. The next major problem was a new fence across FP89 topped with an electric stock wire cable, again reported by Pat Thomas until she almost gave up with pushing Tameside for some action. Another major problem was FP100 blocked at both ends with a padlocked gate at one end and a notice 'private land do not enter' at the other end.

After a lot of effort from Jenny Allen, one of our Courts & Inquiries Officers, we have had some success with Tameside Council. The washed-away footbridge on FP4 has been replaced - but not before a letter 'before action' to issue a Section 56 notice was sent to Tameside. FP89 that was blocked with a fence and electric stock cable noe has a new stile. We had to issue a Sec 130a notice eventually before Tameside would take any action. The path had been blocked for over a year. It is a shame that a gate was not installed. The lame excuse from Tameside was, due to having to meet the Sec 130a notice deadline, they didn't have the time to have a gate made. However they had over a year to take action but then left it to the last minute.

Numerous stile problems were encountered. Overgrown paths, which I tried to clear to the best of my ability with the few hand tools I carry, but a few defeated me completely. Tameside should have a yearly path clearing programme for such paths. Looking back at previous reports it appears a regular problem on these paths. A few very boggy areas, one of which has appeared on the faults list for ten years without Tameside taking any action with the landowner.

I found three definitive line path changes by Tameside that on consulting their paper definitive maps had not been entered on the map by the use of a Definitive Map Modification Order (DMMO) - FP32, FP74 and FP75. On another, the landowner had changed the line of FP19 for their own convenience. I must admit that it was a better line than the very boggy field churned up by horses. Also problems were on the definitive line of FP 98, where the stile into the wood was not on the definitive line. There were a number of waymarking problems. On the obvious ones such as at stiles I fixed waymarker discs. 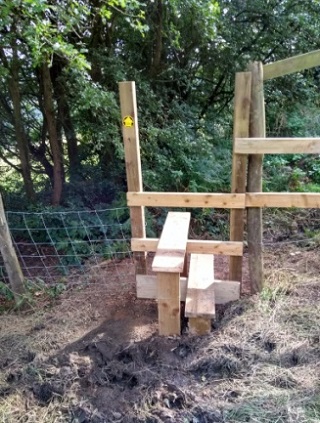 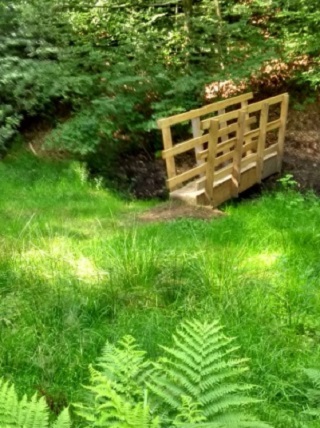