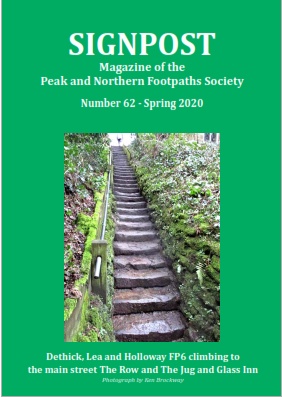 Some of you will know that our chairman David Hurrell has been ill since the end of last year. Unfortunately this has prevented him from writing his usual Chairman’s Piece for this edition of Signpost.

Members are invited to submit photographs for Signpost's cover.

Due to the Covid-19 epidemic the society's AGM has been postponed until 17th October 2020.

Path Checkers is a new way of reporting footpath issues to PNFS, alongside but distinct from the work of Footpath Inspectors.

Peter Bowler died on 31 Dec 2019 aged 86. Like wife Hilda, he was a long serving and valued volunteer at Taylor House HQ regularly on Monday mornings. 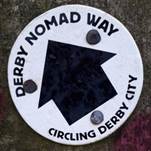 The Derby Nomad Way is a circular walk of 50 miles around the City of Derby. It was created in 2010 to celebrate the 75th anniversary of the Derby Nomad Ramblers Club.

These lanes form a long route leading south from the National Park's Minninglow car park via the High Peak Trail. It is potentially very useful for walkers, especially the less able, when the field paths are impassable due to mud

A matter of great interest to the Society is the proposal in relation to the path now recognised as definitive, in front of Brown’s Houses behind the sea wall. Those with long memories my recall that the status of this path was first called into question some 20 years ago when it was to be part of the Lancashire Coastal path. The report from Natural England is now available on line (www.gov.uk/englandcoastpath).

PNFS Can Help Improve a Path Near You
by David Gosling


I am sure we all know places where a footpath could be improved, for example, by the addition of some steps on a steep slope (see illustration), by a boardwalk over some marshy ground, or by replacing a difficult stile with a gate.

Members who came on the long walk from Ilkeston in 2017 will recall with horror the walk across a stockyard of concrete pipes on Stanton by Dale FP18. On my last inspection, September 2019, I was pleased to see some progress.

Cat and Fiddle
by David Morton

Reading Mark Cocker’s Country Diary in The Guardian of 4 February 2020, I came across several points of interest relating to Buxton in the PNFS heartland.

The PNFS has recently formed an Investment Subcommittee. Its remit is to advise the trustees on the Society's investment policy and strategy.

Book Review: Why North Is Up
by Mel Bale

Mike Ashworth’s book ‘Why North Is Up: Map Conventions and Where They Came From’ does exactly what is says on the cover.

Besides the main archive at Taylor House, the Society has accumulated a variety of other material that has both current and historical interest.

Memorial at Drinkwaters
by Shirley Addy

Recently whilst walking to inspect PNFS signpost S527 on Great Hill, situated between Chorley and Darwen, I came across an unusual and discreet memorial at Drinkwaters.

Become a footpath inspector for PNFS!
by David Gosling

On a pleasant day in January 2019 my group of intrepid retired teacher friends walked to a famous landmark, Winter Hill, to view the television mast, other aerials and the surrounding Lancashire landscape.

I am an inspector of PNFS signposts that have grid references beginning with SD - as well as a footpath inspector - and early last year I devised a walk that would involve seven signposts in the Darwen area of the West Pennines.

The Long, Slow, Lingering Death of Ilkley 8
by Andrew Harter

If like me you have a life long passion for maps you will probably find a book titled 'How to Draw a Map' hard to resist, but beware and remember the old adage 'Don't judge a book by its cover'.

This parish lies mostly in the Bowland AONB and boasts the greatest total length of public rights of ways as well as the longest name in the Ribble Valley. Its name comes from three ancient hamlets but Hurst Green, which is popular with visitors, is its only village.

Recently reissued as a second edition, Navigation was first printed in 2007 and became a best selling outdoor skills guide. Subtitled Techniques and skills for walkers, this book is aimed for walkers who seek to learn how to use a map and compass and those wishing to refresh their old, perhaps forgotten, skills.

A Walk in Words Only
by Ken Brockway

The ethos of PNFS is set out in the constitution. I joined hoping to contribute to the aims in exchange for the pleasure I get when out walking. So while I'm happy to spend time inspecting, reporting and researching there are days when I want to get out there and just enjoy the path network.

Due to the Covid-19 epidemic the society's Walks Programmed has been suspended until further notice, check our website for updates.

Due to the Covid-19 epidemic the society's Walks Programmed has been suspended until further notice, check our website for updates.

Signpost is edited and published for the Society by Shirley Addy, editor@pnfs.org.uk. Postal: contact via Taylor House, 23 Turncroft Lane, Offerton, Stockport, SK1 4AB. Design and Print by Lymetrees (Tel / text 07984 059150).
The views expressed in this newsletter do not necessarily reflect those of the Society