Wolfstones Heights is more than an evocative name conjuring up long forgotten stories of last Wolves lurking in a wild corner of Yorkshire. Long after the Wolves have disappeared, here in the 21st Century, it remains a place of value to both the local population and visiting walkers alike and, I like to think, retains an element of those wild past times.

At 323 metres above sea level the trig point sits on an island of heathery ground which has been open to the public for fairs, celebrations, quarrying, running, walking, picnicking and enjoying the view for as long as there have been people here. Access to Wolfstones Heights is an entirely car free experience from the valley and surrounding villages via a lovely walk along Holmfirth Footpath 60.

For the past few years this valued access has been under threat thanks to a planning application for something as banal as car parking spaces at a nearby property. Kirklees Council granted authority for the construction of the spaces which implicitly involved the diversion of Holmfirth 60 away from Wolfstones Heights. The effect of the proposal would be to move the terminus of Holmfirth 60 from its direct connection to Wolfstones into a no man’s land on a blind bend of a road which then facilitated a walk back up the hill!

The proposal arguably stemmed from an error in the planning consultation process with Kirklees Rights of Way Section registering no objection because the path on Wolfstone Heights itself is not definitive, nor is the land recorded as open access under the provisions of the CROW Act. However what they missed was the fact that Wolfstone Heights is owned by the Parish Council and dedicated for public enjoyment.

This fact became apparent in the unprecedented level of objection to the proposal but despite this Kirklees Rights of Way section would not acknowledge the initial error or consider maintaining the direct route of Holmfirth 60.

After several years and a number of withdrawn and resubmitted proposals (all diverting Holmfirth 60 away from Wolfstones) the final proposal went to Planning Committee earlier this year. Rather oddly the Officer recommendation was that Kirklees should make an order to divert Holmfirth 60 but should objections be received the council would take a neutral stance and the applicant would instead argue for the order at a public inquiry. This seemed to me highly unusual. 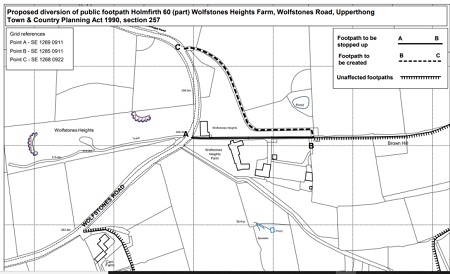 I spoke at the Committee outlining Peak & Northerns detailed objections in the allocated 2 minutes! Credit must also go to Huddersfield Ramblers, Holmfirth Walkers Are Welcome and Holmfirth Harriers who all spoke against the proposal.

Following a well-informed discussion the committee voted not to make an order to divert Holmfirth 60. This is the first time in almost 20 years that the committee has voted against an officer recommendation on a footpath diversion proposal. It is a significant victory and protects Holmfirth 60 for future enjoyment by the public. I was convinced that the only realistic chance to defeat the diversion was at the committee stage because councillors tend to listen to wider arguments beyond the strict legal criteria which would be considered at a public inquiry.

Of course this is only a very brief summary of events and the amount of work that goes into making a case, successful or otherwise, is substantial. It is a team effort at Peak & Northern and I am grateful for the support and input from members of the Courts & Inquiries Officers Committee and the ever enthusiastic Terry Norris.

Next: PNFS Display in Libraries