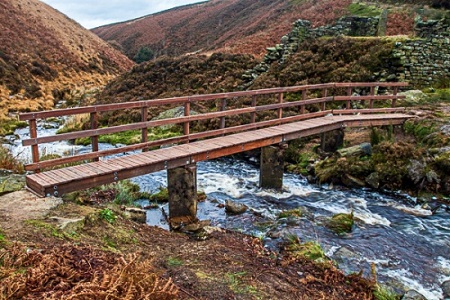 Photograph by the author

Blackpool Bridge is an intriguing name to read on an OS map by a river out on a Yorkshire moor. On seeing it for the first time 30 years ago it conjured up images of towers, illuminations, kiss-me-quick hats and teeth-cracking rock. It can’t be right I thought to myself. Having come across plenty of cartographers’ naming mistakes in the past I filed it away for future reference. Holmfirth is a part of the world where there is often a mismatch between locally used names and what the Ordnance Survey records. On asking directions out of Holmfirth for a certain pub many years ago I was told firmly to follow the “Isle of Skye Road out of town”! That’s going to be some drive I thought as I drove off without a clue.

Blackpool Bridge crosses Marsden Clough at SE 088 069 on Holmfirth Footpath 64. Heathery banks tumble steeply to a peaty river surrounded by gritstone rocks. The grouse cackle here all year round and in spring curlew babble like the river and cuckoos call. An appealing location for a picnic and paddle and whilst the river can be hopped across in normal conditions it rises dramatically and flows quickly after rain. Blackpool Bridge is the only safe crossing in Marsden Clough and has saved the bacon of many a sodden rambler coming off Black Hill.

The original Blackpool Bridge was a rather grand stone affair with two arches and built to carry horse drawn carriages. It’s long gone but the abutments remain on the south bank. The track back then led up to a farm called “Better Than Expectations” which easily makes it to the number one spot in my hit parade of farm names around here. Sadly this wonderful name was at some point downgraded to the more prosaic “Goodbent Lodge”.

The modern Blackpool Bridge has always been a rickety affair built with minimum materials due to the inaccessibility of the site and council budgets not stretching to a helicopter. Its condition had deteriorated to such a degree that in early 2018, with the approval of the Courts & Inquiries Officers’ Committee, I served a Section 56 notice on Kirklees Council with the intention of securing a replacement bridge. As ever with these cases there’s much toing and froing in the form of emails, phone calls, site meetings, occasional foot stampings and bridges over troubled waters but in just under two years Peak & Northern have secured a completely new Blackpool Bridge.

The new Blackpool Bridge is a significant upgrade being made from sustainable hard wood and having a non-slip surface. Bob Procter the Society's Footbridge Officer became involved and we contributed £2,000 for these improvements. The overall cost of the new bridge was £12,000.

The PROW Project Officer at Kirklees did an excellent job and pulled out all the stops to get the bridge in before the end of November 2019. The Trust for Conservation volunteers worked in some atrociously wet weather throughout that month to get the job done and I’d like to express my thanks to them and Kirklees staff. The new Blackpool Bridge fits in well with its wild surroundings and should carry walkers across the clough for many years to come.

But does it have the right name? I think not. Talking to the generation above me in the valley it quickly became apparent that it is not Blackpool Bridge but Black Pool Bridge. The bridge has no connection with the famous Lancashire resort but, according to my sources, is simply named after the large black pool just down river of the bridge where back in the day youngsters would swim and play. I’ve spoken to several people who learnt to swim here. Perhaps the cartographer had the seaside on his mind?