How some water heading for the Mersey and the Irish Sea used to end up in the Trent and the North Sea - and all by gravity.

PNFS members - by virtue of where most of us live and enjoy our walking - are only too familiar with the concept of a watershed. Sometimes the point of inflection is clear - maybe high in the Pennines when you suddenly realise that everything to your left drains to the Irish Sea, everything to your right to the North Sea. Sometimes though, it’s far from clear that you’re at such a point. For example, Black Moss Reservoir on the Pennine Way above Marsden lies in relatively flat, featureless terrain, and it’s only when you note it has dams at both its western and eastern end that you realise it straddles the watershed. Well to the south of these examples, in ‘my’ parish of Heaton, and the adjoining parish of Rushton, is a piece of industrial archaeology that’s gradually being reclaimed by nature. It’s worth a visit if you’re nearby. 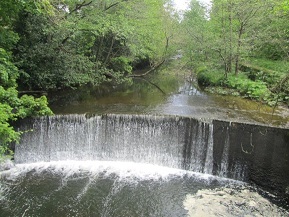 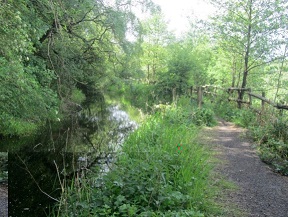 The reservoir at Rudyard Lake was created in the late eighteenth century to provide water for the Caldon Canal - a branch of the Trent and Mersey Canal. The two canals join at Etruria, part of the Stoke-on-Trent conurbation. Canal operators were always anxious about securing sufficient volumes of water. At some stage, not content with the natural flows into Rudyard, thoughts turned to the considerable volumes flowing in the River Dane just to the north. There was just one problem - the Dane flows north-westwards, to meet the Weaver at Northwich. For the scheme to work, water had to be got across the watershed between the Dane (and ultimately the Mersey) and the Churnet (and ultimately the Trent) - a point in the village of Rushton Spencer.

An elegant solution was devised. In the hilly ground behind Rushton Spencer, about one kilometre downstream from Danebridge, an intake was constructed at a weir on the Dane near Gig Hall (SJ955642). Water abstracted at that point then flowed along a man-made conduit, approximately five kilometres long, passing to the east of, and slightly above Rushton Spencer, and eventually reaching Rudyard Lake. The elevation of the intake (~ 165 m OD) on the upper part of the Dane, and the very modest fall along the length of the conduit, allowed the water to be taken over the watershed (~ 159 m OD) without resorting to tunnels or lengthy culverts. The conduit is now disused, and only part is in water. Nature is gradually taking over, but the alignment is clear and much of the route can be walked along the ‘towpath’ - but note that sections can be very muddy in winter. The Dane Valley Way and the Gritstone Trail both take advantage of the route in places - but it’s rare for the path to be busy.

Of course, conduits intercepting headwaters to take water to another valley aren’t that unusual in the Pennines. For example, there are extensive networks above both Littleborough and Ripponden, but typically these are within a single river basin. What appeals to me about the Rushton Spencer conduit is that as you walk in attractive countryside alongside a modest waterway, it gradually dawns on you that in theory at least, its impact was far more than might be appreciated – taking water from the west and sending it to the east. Come and see for yourself next time you’re in the area!