Peak and Northern is a charity which aims to protect and improve public access on rights of way. A key part of what we do is to monitor rights of way and lobby highway authorities to remove obstructions, ensure stiles and gates are in good condition, maintain signposts and so on. Currently, we have appointed 125 footpath inspectors to carry out this job in their areas across the PNFS region.

At the beginning of this year we launched the Path Checkers scheme. The idea was to appeal to people who are keen to help Peak and Northern monitor rights of way, but who do not want to commit to being an inspector for a particular area. So how is this scheme going? Up to August 2020, 33 people have registered to be a Path Checker, which is an excellent start. Of these volunteers, 16 have sent in a total of 22 fault reports. In this period, we have recorded a total of 83 reports since 1 January 2020. By way of comparison, in the previous six months 47 fault r eports were received from the society members and from other walkers. We can see that there has been an increase and the Path Checkers scheme has contributed to this increase. However, there may be other reasons why there has been an increase. At the beginning of the COVID-19 lockdown there was a sudden upsurge in the numbers of people using rights of way many of whom were people who were not normally walkers but individuals and families using paths for the first time in their locality. Walking from home became a new national past-time. The importance of the Society’s mission for public health, mental and physical, was underlined as never before. 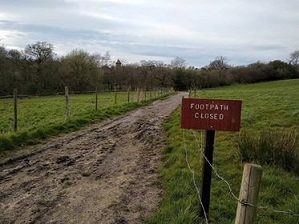 Illegal footpath closure sign at the start of the
COVID-19 lockdown (Glossop 4).

There was a downside to this influx of new users of rights of way. Many were unaware of the exact line of the path or were deliberately straying from it. Some landowners with a right of way on their land, especially those who had one or more people classed as ‘vulnerable’ living close to a right of way, panicked. There were numerous examples of landowners attempting to illegally close paths and bridleways and this contributed in part to the increase in reported problems. PNFS were sympathetic to the plight of vulnerable people, and we did not contest agreed diversions where this was feasible, but we did object to illegal closures. Highway Authority PROW officers were kept busy advising landowners that could not simply close a public right of way. During this period, most authorities posted advisory notices suggesting alternative routes. The Society is monitoring these notices carefully to make sure they do not become permanent features.

There have been some notable successes in this period. We had two separate reports of a footbridge that had become a hazard in the delightfully named Sunnydale near East Morton. We do not have an inspector in Keighley, so reports from the public are an important source of information about the path network. In this case the Authority, Bradford, reacted very quickly to do some temporary repairs to the bridge, which is now on their list to be renewed. In another case a report from a walker alerted the Society to a new fence that had been erected across footpath 98 in Longendale, Tameside. Our inspector, Paul Easthope had inspected this path just a year ago in May 2019, so the report of the new fence was very useful. After some continued pressure on Tameside, the PROW Officer is now promising to take action against the landowner.

We received three reports from the public relating to the footpath that passes in front of Jenny Brown’s cottages, which was finally opened last year after the Society had fought a twenty year battle. The reports all referred to notices deterring walkers from using the path due to a resident being classed as vulnerable to COVID-19. Naturally, we were suspicious of the motivation behind posting these notices. We reported the matter to David Goode, Senior Rights of Way Officer at Lancashire County Council, and he advised us that indeed a resident was self-isolating and that advisory notices were justified. However, we will be making sure that the notices are removed as soon as possible. 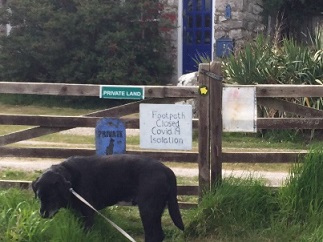 These examples show the important contribution that reports from Path Checkers, PNFS members and other walkers make to achieving our charitable aims. All reports are recorded and sent to the relevant inspector or Officer. Thank you to John Fisher who is now the volunteer undertaking this task. I plan to maintain regular contact with Path Checkers, and also to recruit more from students, scouts, and running and walking groups over the next year.

Next: Tallest Ladder Stile Ever?