Slow Ways is a project to create a national network of footpaths linking places of interest and where we live. Well, that's my definition and you may quickly reply that we already have such a network, but do we? Choose two points, say Stockport station and New Mills Torr Top then plan a walking route between the two. Make it as off road and pleasant as possible but also direct. First stop Ordnance Survey maps and the rights of way network. Now we all know this is not a stand along network, it relies at times on roads so are the roads safe to walk along? Google Street View can help here, is there a footway or pavement? 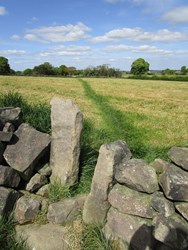 In urban areas our definitive paths let us down. Many cut-throughs are not recorded but are adopted highways so how do we find these? Are there any permissive paths we could use? How do we find these without a site visit? One source can sometimes help. Google fails to record most walking routes on its maps. OpenStreetmaps (OSM) is an international, crowd-sourced project to create a free map of the world – since 2004, thousands of volunteers have input data about roads, railways, rivers and yes, footpaths. They have mapped 35,000-plus paths, official or informal paths worldwide, including around 1,500 in the UK. Anyone can add a path at any time. Some of the footpaths shown on OSM replicate OS and the definitive map but they also show what I discoved are called 'desire paths'. Paths created by users for a purpose, be it a short cut, a dog walking route or in recent times a parallel path to accommodate social distancing. With regular use these desire paths can quickly become established then we may see action by the powers that be. Steps may be taken to either prevent use with barriers or accept the path and provide an improved surface.

OSM maps the world as it is and how it's used by various other companies, meaning that keen gamers have noticed that paths which aren’t visible on Google Maps show up in the augmented reality app Pokémon Go. Report a fault on the Derbyshire website and a map allows you to pin point the fault location, of the base maps options, one is OpenStreetMap. Photograph is on the map but just shows how quickly a path can be established with use. For more information go to the following websites: https://ravenellison.com/portfolio/slow-ways/ and https://www.msn.com/en-gb/lifestyle/other/paths-of-desire/ar-BB15swwo?ocid=spartan-dhp-feeds

I have been helping to create slow ways. The routes planned in lockdown will soon need testing so I asked the man behind the project, Daniel Raven-Ellison, for more information click HERE!

Next: Interview with Daniel Raven-Ellison