Up to May we had only managed to install one new signpost in 2020, ie 605 at Brown’s Houses on Silverdale footpath 14. Covid 19, heatwaves, reimposed lockdowns, thunderstorms, etc haven’t helped since, but we’ve certainly worked quite hard and made some progress as follows. 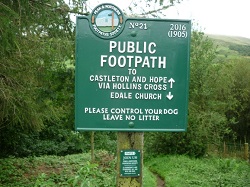 New signposts since May:

July: 609 at Longstone Edge on Great Longstone FPs 30/31 in memory of Colin Henson; 610 at Shutts Farm, Bakewell on Bakewell FPs 4/7 in memory of Geoff Errington; 611 at Bakestonedale on Pott Shrigley FP1 and BW 19 for John Goodman’s 80th birthday

In periods of fine weather I’ve been busy inspecting, cleaning, wedging posts and plates and painting the polychrome badge/logo/crest on our older signs. I even managed in July to get to Baildon, Ilkley, East Morton, Oxenhope and Trawden near Colne after a three year gap. 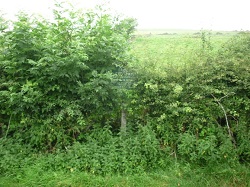 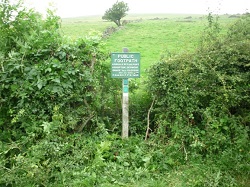 It’s also been a busy time for me retrieving fallen signs and checking on stolen or missing ones. Signs which have rotted and fallen are: S080, which has been repainted and remounted on a concrete stump on Whaley Lane; 429 (near Peak View Tearoom); 354 (Weaver Hills, SE of Waterhouses) which will also go concrete stumps; 222 at Dam Farm, Peak Forest will go on a wood stump; 142 NNW of Shutlingsloe is ready and 286 at Turton Heights just needs re-posting. S299 in Tom Wood has already been reposted by John and Jeremy (see below). The farmer kindly reinstated S270 on Taxal Edge.

In late April S273, a simple post without a plate, was reported missing from Prestbury Lane. I phoned Cheshire East PROW then searched in early May. It has been replaced by the HA with a new fingerpost so with their consent I have attached a new memorial plaque and JUP to it to save money and clutter.

On next page are before and after photos of S014 to highlight the value of my signpost inspection. It bears the date 1905. It is in excellent condition, following refurbishment in 2003.  You can still see the 4 pin-heads used to hold each moveable letter in place on the pattern and the stops look like asterisks.  I think it is very high quality cast iron, which has subsequently been shot-blasted and powder-coated.  It's now lost its shine, but considering its next to a road that is salted most winters, it looks remarkable.

I also repaired S021 at Edale, which had fallen over and was reported by Jim Bosworth. I made a temporary repair with some timber I took, but the landowner, Tony Favell, a former MP for Stockport (1983-1992), says he will fix it properly with his son next week, along with the stile and drystone wall. I'm glad I invited Tony to the unveiling of S500 in late 2015, at Highfield Farm near Upper Booth, Edale.  He was chair of both the Edale PC and PDNPA.

S417 was stolen from Taxal Moor Road in June. The farmer thinks probably by “off-roaders”. A new plate is on order and the MP to New Mills RR will be reordered.

Most recently I checked on S316 erected in March 2008 at Chew Reservoir, Greenfield, and decided to remove it from its post and get it shot-blasted. I returned with a car three days later, only to find the plate had been stolen. It will be replaced. Finally, 258 at Jumbles, Bolton, was reported missing by Shirley last week, but the UU Catchment Controller leads me to hope that he has it and the plate will be reusable, if not the post and plaques.

For more details of each signpost's location, go to http://peakandnorthern.org.uk/signposts/where-they-are.htm